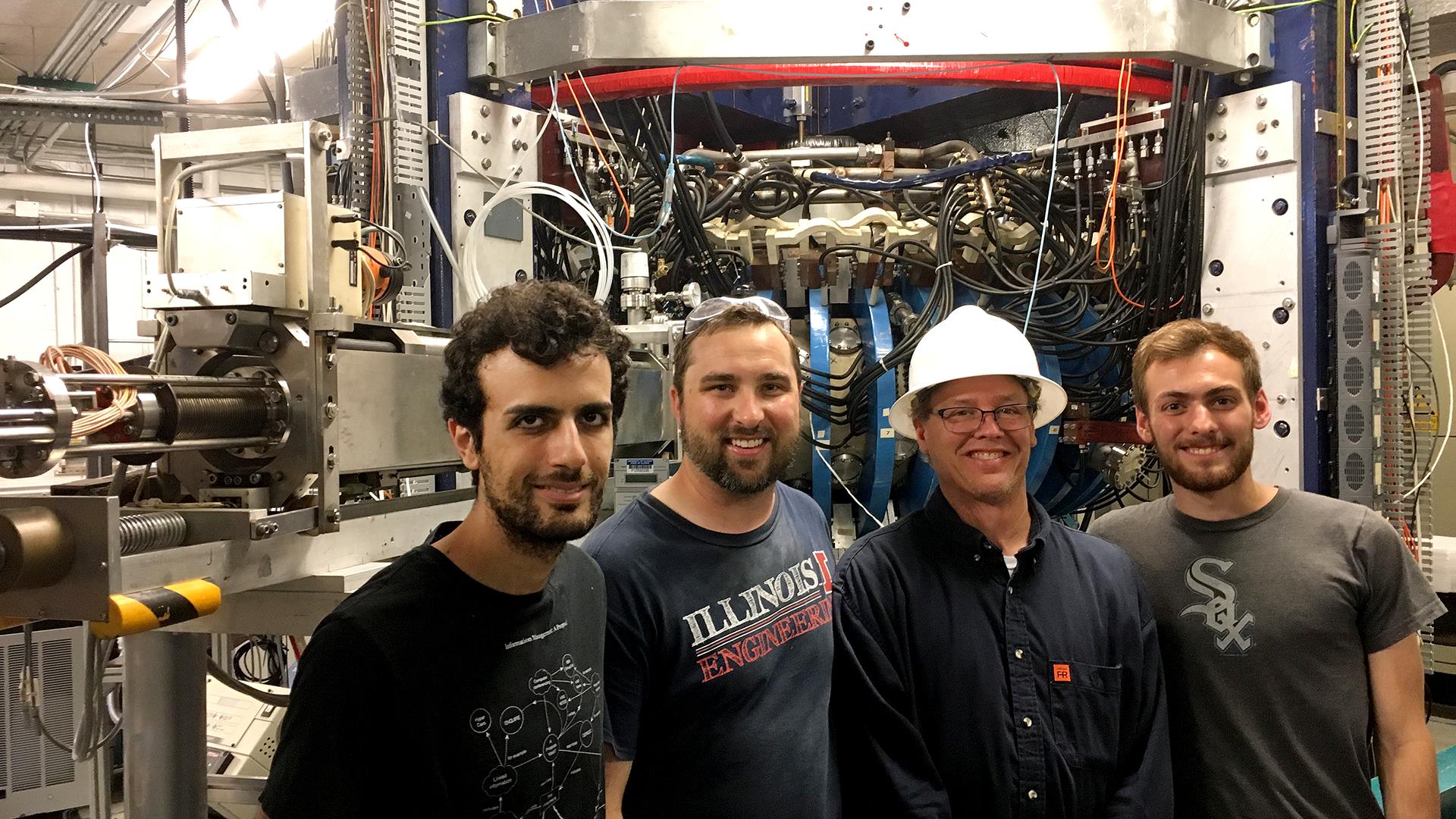 Eight months of careful preparations have led to success in now making the HIDRA plasma/fusion facility in Nuclear, Plasma, and Radiological Engineering at Illinois fully operational.

The facility, housed in the Center for Plasma-Material Interactions (CPMI), achieved first plasma in spring 2016, but was operating in low power mode until late July of this year.

“Even though we ran plasmas and had HIDRA running, we were not at full capability,” said NPRE Assistant Research Prof. Daniel Andruzyk, who directs HIDRA’s operations. “We had to commission the main power supplies, the rectifiers. The 20,000 volts that were coming in and the thousands of amps (for HIDRA) took a while to commission. We had to get (industrial applications firm) QuadPlus to come in with expertise to do this, and had to take our time to make sure that everything was in order.”

Combining capabilities of a tokamak and a stellarator, HIDRA provides scientists a valuable and unique testbed for plasma/fusion experimental research, the type of science that could one day lead to viable energy production from fusion reactors. HIDRA was transported from its original home at the Max Planck Institute for Plasma Physics (IPP) in Germany in 2014, and Andruczyk and his team have been very deliberate in reconstructing and safely restoring the facility to full functionality.

Since November, the team has been prepping CPMI’s headquarters in the Nuclear Radiations Laboratory to handle the substantial 2 million watts of power that will come in to the building to run HIDRA. “We had to make sure that the control system for this was up and running and make sure that we tested it and it was debugged,” Andruczyk said. “The 28th of July, we ran just the toroidal coils. Everything worked awesome; the control system worked beautifully! On Wednesday, August 2, we ran the helical coils and ran both (those and the toroidal coils) together. Everything works.”

HIDRA’s control system consists of a control panel and computer that operates water pumps and rectifiers, among other tasks. The entire system can be switched on and shut down immediately with a push of a button. “We have a computer control program in which we can put in any shape of plasma that we want,” Andruczyk said. “We shape the magnetic fields with the press of one button of the mouse; one person can run the whole machine, basically.”

Gaining full operability marks a tremendous milestone for HIDRA at Illinois. It was the goal of the first year of a 3-year, $1 million U.S. Department of Energy grant NPRE received in 2016 to support HIDRA’s work.

Now collaborating researchers from Illinois and the Princeton Plasma Physics Laboratory (PPPL) will use HIDRA to test plasma-facing components the scientists propose using in the much larger Experimental Advanced Superconducting Tokomak (EAST) in Heifei, China. The combined work ideally will bring the world science community that much closer to developing commercial fusion energy reactors.

Thanks to the work of NPRE Prof. David Ruzic and his group in CPMI, Illinois is the world leader in liquid lithium technology for fusion reactors, Andruczyk said. The use of lithium as a PFC holds several advantages:

Ruzic’s group has designed a method for molten lithium to self-circulate along the surface of a fusion reactor’s diverter, where excess heat is collected and removed. The concept, known as LiMIT (Lithium/Metal Infused Trenches) will be tested in HIDRA, as well as PPPL’s alternate design, FLiLi (Flowing Liquid Lithium Limiter).

“We want to see which design will work first – what would work better for one part of the reactor and what would be better for another,” Andruczyk said. “We want to make sure both technologies are developed and perfected before they are put into EAST. We can find problems and fix kinks here (in HIDRA). It’s easier to shut down HIDRA and change things around than it is on EAST. If they shut down, they have to shut down for six months; it’s a big ordeal for them.”

He added that many experiments tested on EAST might be adopted in the future to ITER, the first international fusion device to produce net energy. ITER is under construction in France, and its first plasma is expected in December 2025.

HIDRA will be available for other research at the same time the PFC experiments are conducted. For example, Andruczyk said he and NPRE Prof. J.P. Allain are using HIDRA for materials testing for a Small Business Technology Transfer grant that Allain holds. “We intend to have several things on the machine at the same time; we intend to make it a user facility,” Andruczyk said. “One test won’t interfere with another.”

Andruczyk also has taught the course, NPRE 498 Fusion Device and Operations, in Fall 2015 and Fall 2016 using HIDRA and started an Introduction to Plasmas course in the spring of 2016.

He pointed out that getting HIDRA to full power was the collaboration of several groups and individuals. He credited the students who worked with him: NPRE graduate student Rabel Rizkallh, and undergraduates Andrew Shone (NPRE), Zachary Jeckell (NPRE) and Daniel Johnson (Engineering Physics), pointing out that Johnson wrote the code for HIDRA’s control system. Andruczyk also appreciated the work of Kent Wegley, a QuadPlus electrical engineer, as well as the work of the university’s Facilities and Services Division, particularly the work of Chuck Kammin.