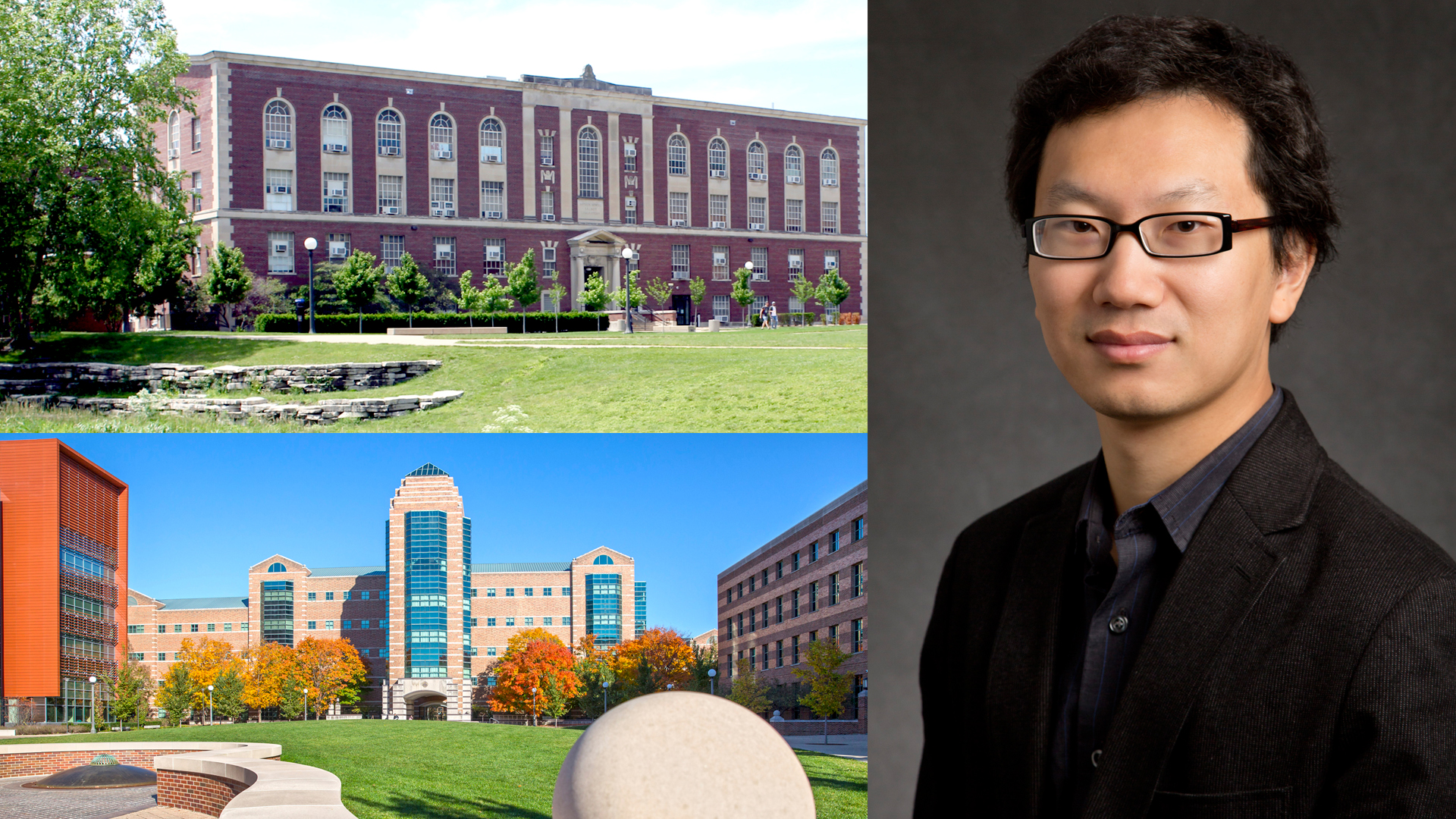 Recently promoted from assistant to associate professor with tenure at the University of Illinois at Urbana-Champaign, Yang Zhang said he does some of his best thinking in the short distance between his home department, Nuclear, Plasma, and Radiological Engineering, and the Beckman Institute for Advanced Science and Technology at Illinois.

“Walking between Talbot (Laboratory, NPRE’s headquarters) and Beckman is among my most creative time,” said Zhang, who is a core faculty member at Beckman and leads the Computational Molecular Science Group.

Those minutes in transition between buildings has been time well spent, as Zhang has made strides not only in his own research but also in the shaping of future work at Beckman.

Having joined NPRE in 2012, Zhang focused on the study of the physics and chemistry of liquids, especially under extreme, interfacial, or non-equilibrium conditions, using integrated atomistic theory, computation, and neutron and X-ray experiments.

Among achievements, he and his students have developed a computational method allowing them to sample long timescale dynamics from the atomic level. Using this method, the researchers have gained insights into a range of phenomena including how glass flows, how water freezes into ice, how micro building blocks self-assemble into materials with unique properties, how materials age and degrade, and how polypeptides fold into proteins in living organisms.

Zhang’s group conducts neutron scattering experiments at the National Institute of Standards and Technology and Oak Ridge National Laboratory to validate their computations.

“Many technologically important phenomena occur over an extremely long timescale,” Zhang said. “For instance, corrosion and fouling, while underpinned by the chemico-physical processes transpiring at the electronic and atomic level, only have significant impact on the performance of materials over long time. It remains a challenge to understand and predict these long-time behaviors of materials from the fundamental laws of physics.”

As an illustration of his studies’ applications, Zhang spoke of the flow of glass in optical fiber, a flow that is much too slow to be visible on the human time scale. However, the flow and deformation of the glass can greatly impact the strength of fiber optics communications signals, he said.

“When we look at them, glasses seem frozen, but they are actually flowing immensely slowly. The cumulative effect is substantial,” Zhang said. “When they fail, they fail catastrophically. We want to understand the phenomena and prevent that from happening. That is the cornerstone of our research.”

Zhang’s expertise in these areas led to his being chosen, when he was an assistant professor, to head Beckman’s Computational Molecular Science (CMS) Group. Unique in academics, CMS has grown to include 12 professors on the Urbana campus.

CMS is profoundly interdisciplinary. It embodies physics, which underpins the underlying fundamental principles; chemistry, which both explores higher-level emergent principles and creates novel synthetic routes of remarkable organic, inorganic, bio-molecular building blocks that can self-assemble to structures with unique properties; and molecular biology and medical science, which are imperative to improve human health and quality of life.

The group’s mission is to develop statistical and quantum mechanical theory-based computational methods that will significantly extend the understanding of equilibrium and non-equilibrium properties of matter from the molecular and electronic level. These methods will provide accurate predictions and meaningful guidance to the design, synthesis, fabrication, and utilization of novel materials.

Zhang has been a member of Beckman’s leadership team since Summer 2017, and his expanded role in the institute has been encouraged by Beckman Director, Prof. Jeffrey Moore.

“That’s when I started to think about building interdisciplinary teams to tackle big and impactful problems,” Zhang said.