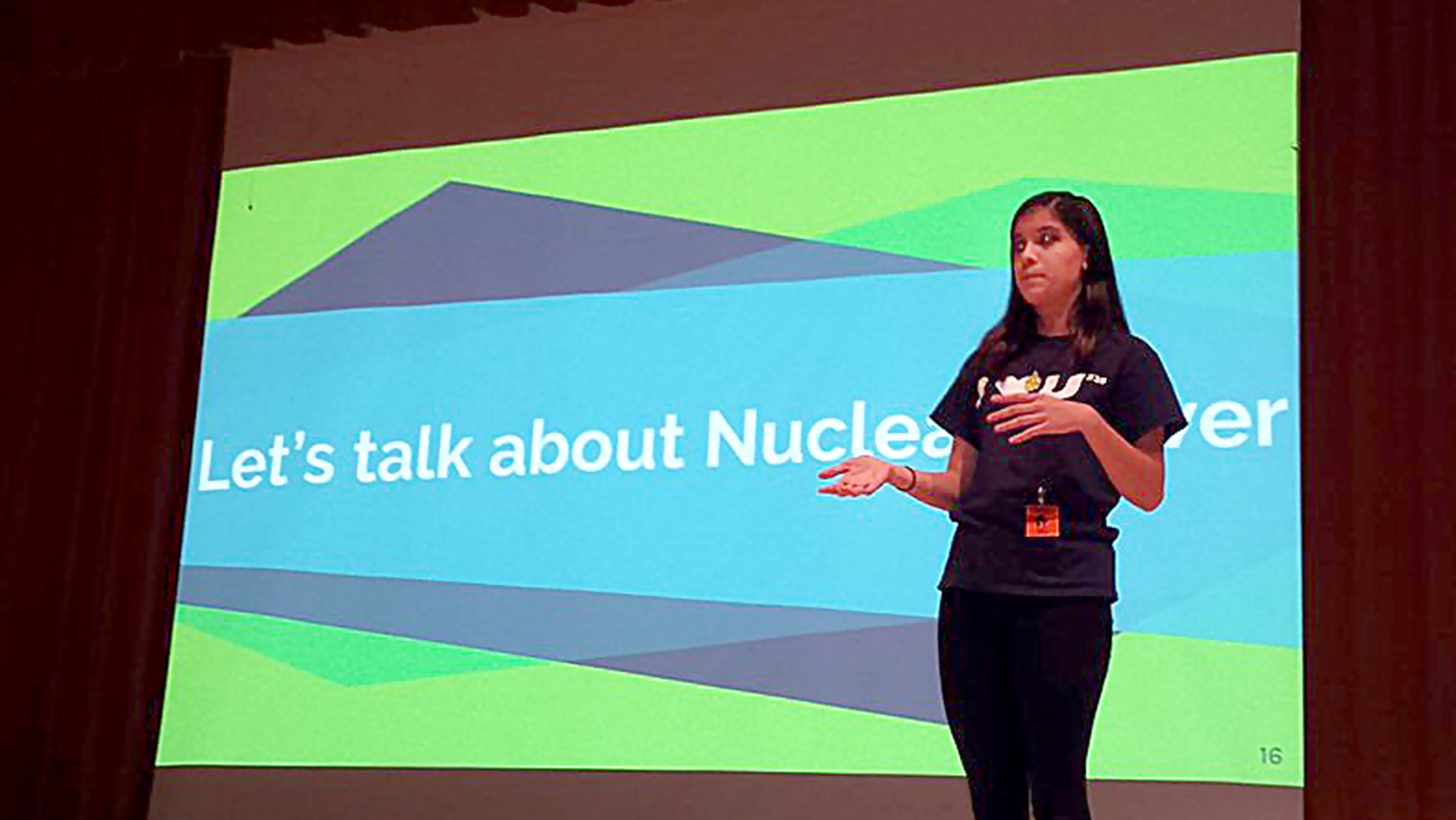 While spending much of the past year traveling to high schools and middle schools to tell students about nuclear engineering and nuclear power, Alyssa Hayes fell in love with teaching.

“I think it’s fun; I like doing it,” said Hayes, a Nuclear, Plasma, and Radiological Engineering junior from Gurnee, Illinois. “I like the feeling that I’m contributing to the community and to the (nuclear) industry.”

Hayes has volunteered her time to visit seven schools across the state of Illinois with a presentation that has grown to 100 slides customized to the audience’s technical knowledge. The sole presenter at several of the schools, Hayes now has gained the support of the Women In Nuclear (WIN) student organization, which is taking the initiative forward as an outreach project.

Hayes first got involved in Spring 2017. Pete Dawson, a science teacher at Libertyville High School in Lake County, Illinois, near Chicago, wanted nuclear science explained to his students. He contacted the national American Nuclear Society organization that, in turn, contacted the Illinois ANS student chapter. Hayes and Aries Loumis, chapter president at the time, joined John Paczolt, an employee of Exelon Corp.’s nuclear generating station in Dresden, Illinois, to talk to Libertyville’s advanced chemistry and physics students. Paczolt brought many of the slides that were used.

“We took all the science classes for one afternoon – it was two hours and two different groups,” Hayes said.

Catching the fever for the effort, Hayes then contacted her own high school physics teacher, Louie Klein, at Warren Township High School near Libertyville, and asked to make a presentation there. On her own, she taught four physics classes and one Advanced Placement chemistry class.

By that time, Riso, Hepler and Hayes had developed a well-designed, comprehensive set of slides that could be re-used and shuffled according to the needs of the viewers. The presentation is set up with sections on electricity and power sources; fossil fuels; nuclear power; radiation; and plasma/fusion; as well as information on nuclear engineering careers.

“We can pick and choose what sections to present so we can base content on what students already know,” Hayes said. “I ask the students’ teachers about what classes I am presenting to, and what backgrounds they have.”

Having the ability to tamp down or ramp up the presentations served WIN well last fall in presenting to a group of girl scouts ranging in age from kindergarten to high school freshmen. “We made two presentations,” Hayes said. “K through 5 was mostly electricity sources and a little about the atom at the end. We kept is simple. For the older group we breezed through electricity and covered nuclear science in much more depth.”

Hayes added another element when she brought the presentation in late December to Brain Storvik’s 8th grade science classes at Viking Middle School in Gurnee, Illinois, where her sister, Emily, is a student. To make the presentation more interactive and encourage student discussion, she inserted question slides at the beginning and middle of the presentation as well as at the end.

“It went pretty well,” Hayes said. “Sometimes there’re groups of kids that motivate each other to speak up and they ask a lot of questions. And there’re some schools where everyone is quiet.

Over winter break, Hayes spoke at Macomb (Illinois) Junior/Senior High School, where she taught eight classes of 50-60 students per class in an auditorium after contacting science teachers Maria Montalvo and Linda Wilson. She also taught all three of Regan Chatterton’s science classes at West Prairie High School in Sciota, Illinois. “I flew solo for both of these events,” Hayes said.

Her enthusiasm never wavered. “When I’m teaching, I’m living off my own energy. The more energy I have, the more fun it is for everybody.”

NPRE Prof. David Ruzic, a highly recognized teacher in his own right, has encouraged Hayes to consider the profession. She hasn’t reached that decision, but her recent ventures make it something to consider.

“I don’t know...maybe,” she mused. “Ruzic thinks in my future I might be an okay professor.”