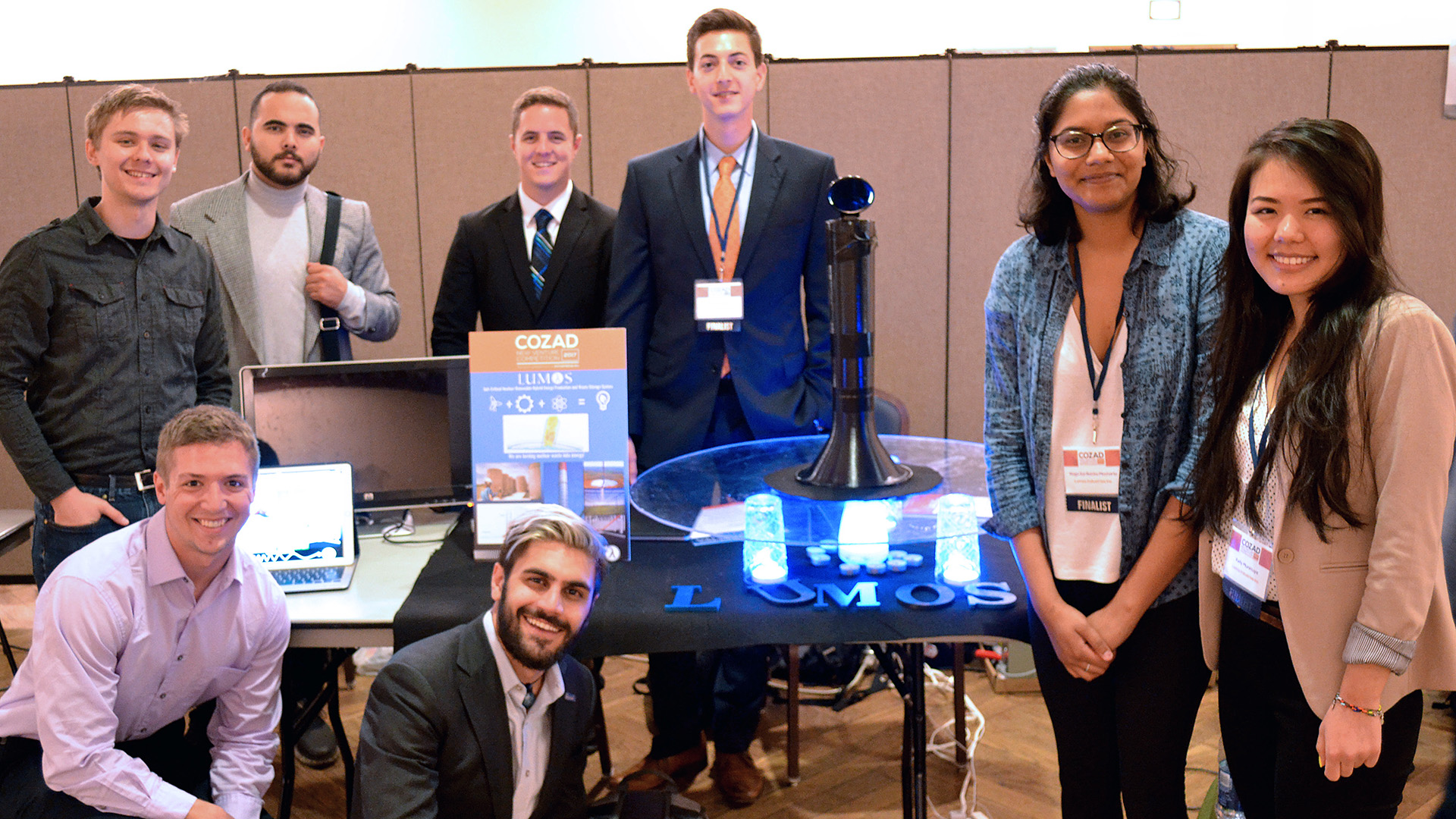 A new startup company led by students in Nuclear, Plasma, and Radiological Engineering at Illinois proposes to create energy from spent nuclear fuel.

The project was among 18 finalists in the 2017 Cozad New Venture Competition of the Technology Entrepreneur Center at the University of Illinois at Urbana-Champaign. The competition encourages students to create new businesses on a topic of their choosing.

The seed that has grown into Lumos Industries, Inc., emerged a year ago from the senior design project of NPRE students Aristidis Loumis and Ari Krause, whose aim was to capture latent heat from spent nuclear fuel. After several design concepts, the two decided on a passive system as the best option, then invented and patented the technology.

Lumos’ system would take full advantage of heat rising from casks used to store spent nuclear fuel at nuclear power plants. “Basically, spent nuclear fuel stays hot for decades after it comes out of reactors and is put in the casks,” said Krause, now a student in the Masters of Engineering in Energy Systems program. “Historically, the casks just passively cool with natural air convection. We thought that was a waste.”

The Lumos design would combine clean energy sources of nuclear, solar and wind. A large plastic collector would be positioned above as many as 500 casks standing together. Solar thermal heat, created by the sun’s rays hitting the air under the plastic collector, would add to the heat rising from the casks.

At the center of the collector would be a chimney extending 200 meters in height. “We wanted to get energy out of the the hot air coming off the casks, and so we thought what does hot air do? It rises,” Loumis said. The tube would resemble an upside down funnel, so that warm air would travel up and out. The wind generated from this air movement would cause wind turbines at the base to spin and generate electricity.

Loumis said a solar updraft tower prototype a German company constructed in Manzanares, Spain, in the 1980s previously had generated electricity. Because the height of the proposed towers for commercial use was 1 kilometer, however, the plan was never implemented. Lumos developers claim they can achieve the same energy production, but with much smaller means than previously proposed.

“It’s a proven concept that (the idea) can produce power, but we wanted to make it more efficient,” Loumis said.

Currently, the U.S. stores 72,000 metric tons of nuclear waste, and much of it is spent nuclear fuel that is kept at the reactor sites where it has been produced. Over 100 nuclear reactors operate in this country, and a plan for a permanent waste repository has eluded the federal government.

Loumis believes the company would be able to gain community acceptance for the Lumos concept if it is approached in the right way.

He said he learned valuable public relations lessons during a student trip to Sweden, where he and Krause studied under the Royal Institute of Technology (KTH) in Stockholm. There they toured facilities of the Swedish Nuclear Waste Management Company (SKB). Under the Swedish method, communities volunteered for the chance to host a long-term storage site to gain the economic benefits it would create.

Those same approaches could be helpful in gathering community support in the United States, Loumis believes. The company would work on a consent-based siting arrangement. Part of that effort would be to allow communities to accept temporary storage for the spent fuel casks, historically a divisive issue.

The student entrepreneurs estimate construction costs for the device to be about $100 million, but that cost is much less than the SKB’s $1 billion Interim Storage Facility for Spent Nuclear Fuel (CLAB).

“It’s an investment,” Said Krause. Lumos developers predict a break-even point for the company within 15 years after the first 3-year construction phase is completed.

The Lumos group members have been honing their business skills while simultaneously developing the company’s technology. In addition to taking part in the Cozad New Venture competition, the students completed the NSF Innovation Corps at Illinois program. Loumis was on the winning team of the inaugural Nuclear Innovation Bootcamp in summer 2016, and Krause will be attending the bootcamp this summer.

Their next steps are to further research, verification, and optimization of their design; seek investors; and apply for Small Business Innovation Research funding,  making use of skills they have gained in working with the Technology Entrepreneurship Center at Illinois.

“Our hope is to eventually partner with a nuclear waste management company, and work with them to potentially commercialize,” said the founders.

In addition to Loumis and Krause, the student startup is advised by Assistant Prof. Kathryn Huff and includes team members:

For a more technical explanation of the technology, please see LumosIndustries.com.