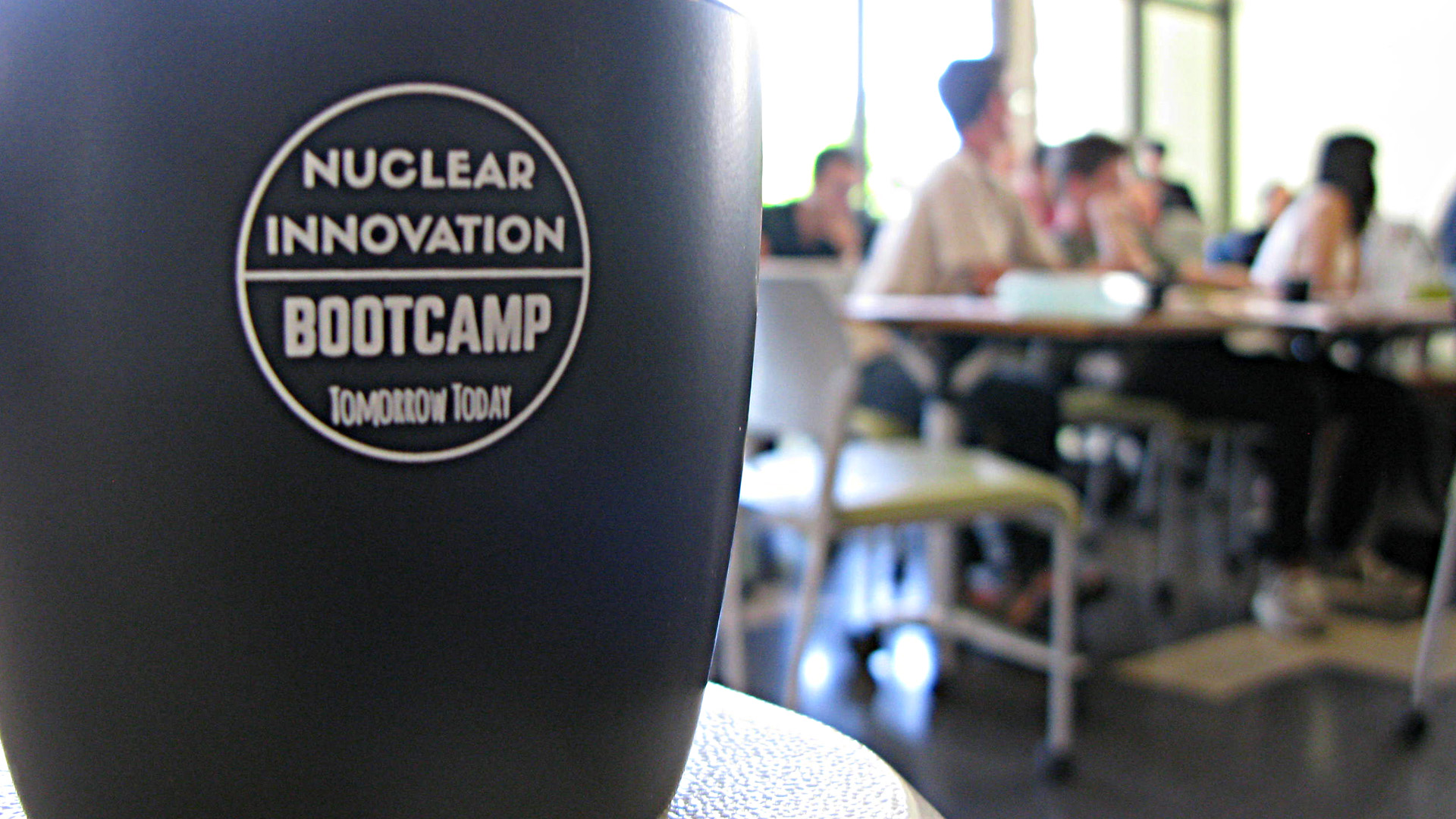 The three engineers performed well in the camp’s final day presentations, held in July at the University of California-Berkeley. Hayes, an NPRE junior, was a member of the First Place team, NuWorld Modular Manufacturing. Krause and Mummah, who earned bachelor’s degrees in NPRE in May, led Atomic Analytics, which was the competition’s runner-up.

As gratifying as it was to impress their judges, the three found the knowledge they brought back home with them to be what they valued most.

“I wasn’t quite sure what I expected; I didn’t really know what we would get lectured on for two weeks,” said Mummah, who will continue graduate studies in nuclear engineering at the University of Wisconsin this fall. “But I found the breadth of the lectures that we had was so incredible – we learned about marketing, the legal and regulatory framework for starting a company, and how to get funding.”

As Hayes continues pursuing her degree in NPRE, she’s grown more aware of the opportunities in innovating nuclear engineering technology.

“It helped me expand my interests and is helping me think about what I actually want to do with my long-term career,” Hayes said. “I’m not going to do my own startup, but I’m thinking more like a business person now. Every time I have a problem, I think, ‘There’s a market for this.’”

Krause, who is now earning a master’s of engineering in Energy Systems at Illinois, already is part of a startup company. He’s the co-founder and Chief Operating Officer of Lumos Industries, dedicated to creating safe, renewable and passive systems to store, cool and generate electricity from spent nuclear fuel. Networking at the bootcamp with professionals who have formed nuclear energy startups confirmed Krause’s own passions.

“It was refreshing and invigorating,” he said. “One of the most important things I got from it was just the sense of relief that people we met and talked with are succeeding in a startup in nuclear.”

Cues from successful nuclear startup company NuScale Power led Hayes and her teammates to the idea for the bootcamp’s winning presentation, NuWorld Modular Manufacturing. The company calls for an assembly plant method to cost-effectively construct small nuclear reactors to meet the need for expected energy growth and replace decommissioned reactors.

The team’s plan would be for companies like NuScale, which design small modular reactors, to order components to be sent to the assembly factory, where the components would be put together and shipped as a completed product for installation in nuclear plants. The team maintained NuWorld’s standardized process would be much more efficient and offer more quality control than the current method, in which individual reactors are constructed on the plant site.

Hayes said one of her teammates works for NuScale, and learned from the company’s executives that assembly is a gap in small modular reactor production. “No one else is doing this; no one is taking the initiative,” she said.

Among her responsibilities within the team, Hayes put together the presentation as well as gathered information to make a case for NuWorld’s premise. “I found out I’m really good at calling up (sources) for rough estimates,” she said. Our team had needed a reactor building crane capable of lifting 750 tons a height of 44 feet with a 69-foot span. I was on the phone for two minutes (with Konecranes) and when (the team) asked how much it was, I said, ‘$5.6 million,’” she said.

Mummah and Krause were the Chief Executive Officer and Chief Financial Officer, respectively, for Atomic Analytics. Recognizing the uniformity of regulations and safety issues that are unique to the nuclear industry, the team based Atomic Analytics on nuclear power utilities’ need for an accessible, easily searchable database to share information about individual plant events.

“An event that happens at a single (nuclear) plant changes the perceptions of the public and the regulatory structures at every other plant in the U.S., and potentially even the world,” Mummah pointed out while presenting.

Atomic Analytics would work in coordination with the Institute of Nuclear Power Operations (INPO), which has collected nuclear power plant information in a database to establish performance objectives, criteria and guidelines for the industry. Utilities pay a fee to INPO to collect the information; for an additional fee, Atomic Analytics’ improved search engine would make the information more accessible for utilities.

Both team’s ideas required the students to think beyond the technical aspects of nuclear engineering to consider matters such as gaining funding, planning financial strategies, developing partnerships, determining locations, identifying team skills, and a host of other aspects.

“I would recommend (the bootcamp) 100 percent,” Krause said. “During the two-week period, I learned more about how the nuclear industry works than I had in a very long time. This program gives you a broad understanding of every single piece of the puzzle that goes into an innovative startup in nuclear.”