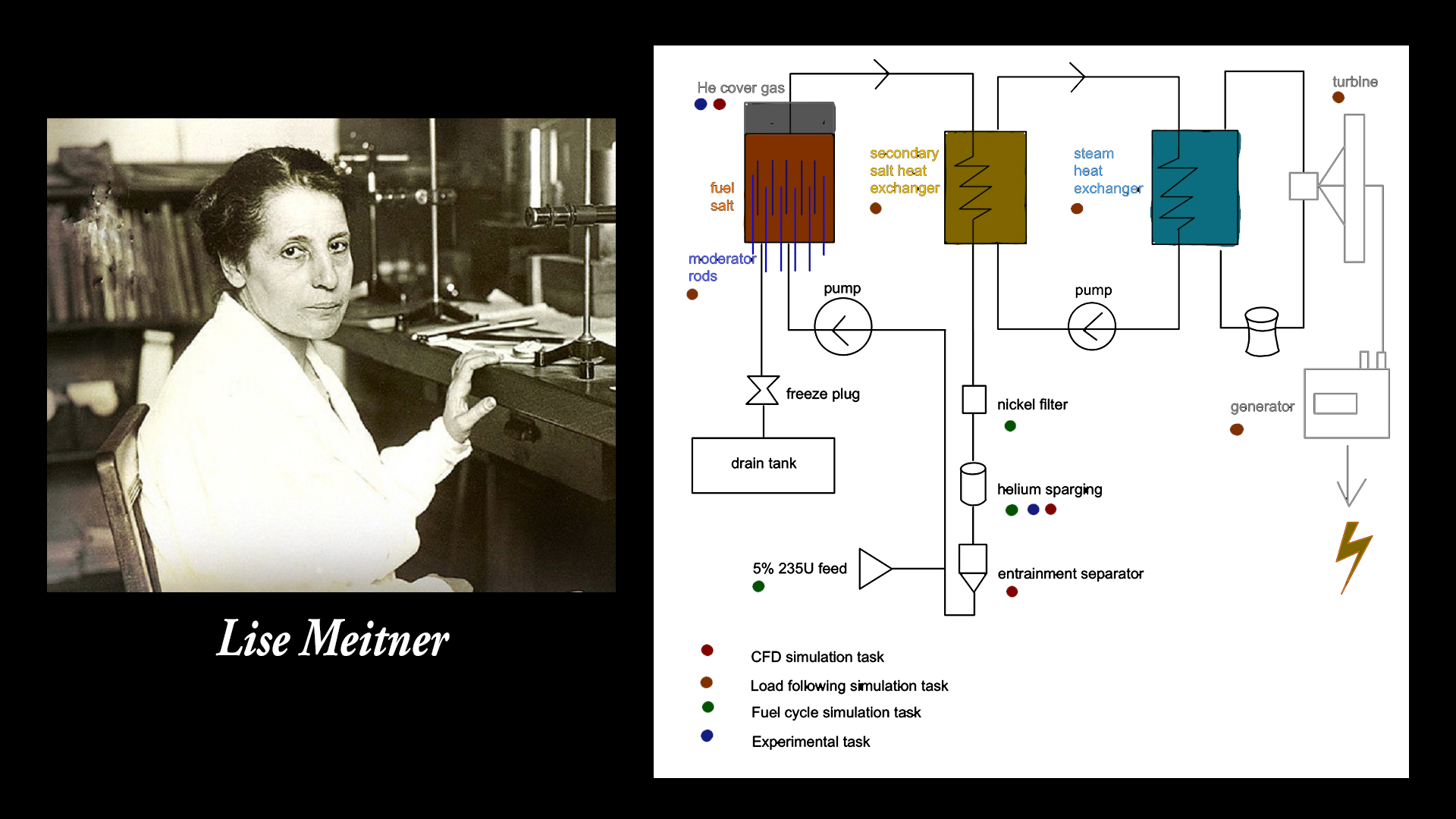 To be competitive with other energy producers, the newest generation of nuclear reactors will need to lower their output during times of reduced electricity demand.

A team of researchers from Nuclear, Plasma, and Radiological Engineering at the University of Illinois at Urbana-Champaign are examining ways to enable this load-following capability. The scientists are conducting simulations to determine how to remove unwanted fission by-products that slow reaction rates and, thus, energy production.

Led by Assistant Prof. Kathryn Huff, the team has gained a $999,000 grant from the U.S. Department of Energy’s Advanced Research Projects Agency-Energy (ARPA-E). By conducting simulations and experiments to establish a design for reprocessing molten salt fuel, the team hopes to remove a major barrier to commercialization for molten salt reactors (MSR). The reference reactor for this work will be the MSR design from Transatomic Power, a startup company based in Cambridge, Massachusetts. Huff will simulate the reactor’s fuel cycle. Associate Prof. Tomasz Kozlowski will conduct load-following simulations. Assistant Prof. Caleb Brooks will examine the system’s computational fluid dynamics. Profs. Jim Stubbins and Brent Heuser will oversee experimental work.

Currently, no MSRs operate commercially, Huff said. In the late 60s, development of MSR technology was put aside in favor of developing light water reactors (LWRs). While uranium is dissolved into a liquid salt solution to fuel MSRs, LWRs use solid fuel.

Efforts to fluctuate power output in LWRs is inefficient, however, partially because of a buildup of xenon poisoning. The poisoning, which can absorb neutrons needed to sustain a nuclear reaction, cannot be removed from solid fuel.

Under normal operating conditions, the xenon is ‘burned’ as it is produced. So, while it has a negative impact on the neutron economy, balancing the reactor controls can compensate for its effect. The difficulty comes when the reactor power is reduced and there are fewer neutrons to ‘burn out’ the xenon. In that case, the xenon concentration increases and further suppresses reactor power; the reactor must take some time to recover from the power reduction impact. The recovery time is delayed by xenon radioactive decay since few neutrons are available to ‘burn’ it through neutron capture. This response to changing power levels, particularly from higher to lower power levels, dramatically slows the reactor’s response to power demands.

Conversely, because fuel in an MSR is mixed in the molten salt and flows through the reactor, xenon can be removed from the fuel outside of the reactor core to eliminate its impact on operations. If achieved, this capability would make it possible to vary the reactor power output with very little required recovery time, allowing MSR reactors to load follow.

“The economic benefit would come from not producing more energy than can be used,” Huff said.

The project is funded by ARPA-E’s Modeling-Enhanced Innovations Trailblazing Nuclear Energy Reinvigoration (MEITNER) initiative, which seeks to develop innovative technologies that can help ensure advanced reactors have a path to commercial viability.

The funding program is named for Lise Meitner, an Austrian-Swedish female physicist who worked on radioactivity and nuclear physics. Meitner and Otto Hahn led the small group of scientists who first discovered nuclear fission of uranium when it absorbed an extra neutron; the results were published in early 1939. Meitner understood that the fission process, which splits the atomic nucleus of uranium into two smaller nuclei, must be accompanied by an enormous release of energy.