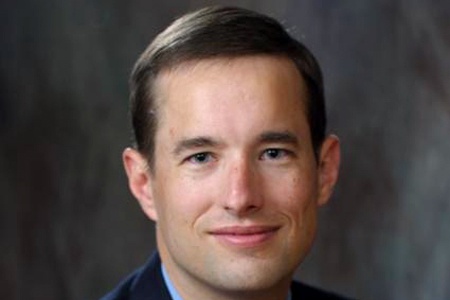 Recognized at the NPRE 2012 Honors Banquet in April, Neumann exemplifies the award’s intent, to recognize those among NPRE alumni who have demonstrated their loyalty to the Department through volunteer efforts, financial contributions and/or other forms of advocacy. He was cited for “dedicated leadership in supporting NPRE’s goals to provide outstanding service for our students, alumni, faculty and staff, and in enhancing the Department’s reputation as a world leader in nuclear, plasma and radiological engineering.”

From his undergraduate days as one of the leaders of the Orange Crush student cheering section, to his leadership as acting director of the Center for Plasma Material Interactions, to his current membership on NPRE’s alumni board, Neumann has enthusiastically promoted NPRE and has worked diligently toward the Department’s objectives.

As a graduate student his involvement in academic professional societies showed Illinois in its most positive light. As an adjunct faculty member, Neumann’s promotion of Illinois took on an international character when he organized an open house in April 2009 to draw businesses to join CPMI. Over 40 researchers from five different countries came to the Urbana campus and the Center received over $150,000 of funding in the process, as well as a five-year grant from the National Science Foundation.

Neumann also has been very supportive in his personal financial contributions. His giving started while he was a student and continues today as he works with the NPRE Department to develop and encourage giving among other alumni.

In addition, Neumann has participated in NPRE Interchanges, events designed to bring alumni back to campus to network and interact with students and faculty. Alumni attend as representatives of their employers.

In his capacity as a senior engineer, Neumann has represented San Jose, California-based Soladigm, a developer of next-generation green building solutions designed to improve energy efficiency.