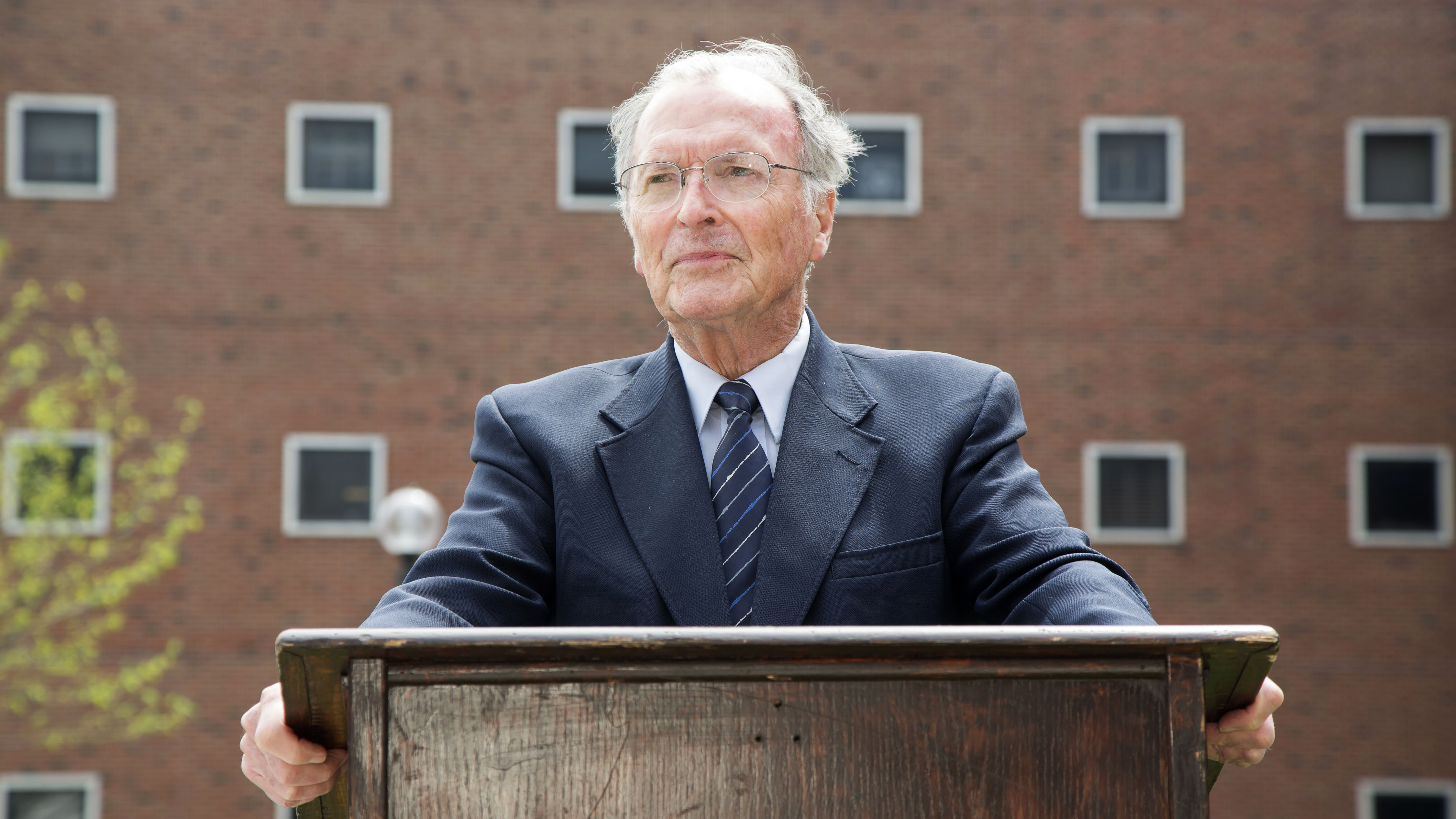 The award recognizes an individual who has made outstanding scientific or engineering research contributions to the development of peaceful uses of energy. Seaborg Medal recipients reflect a high degree of scientific acumen, imagination and unusual talents in scientific research, and have made significant contributions to applications of nuclear technology.

In his 55-year career in what is now Nuclear, Plasma, and Radiological Engineering at Illinois, Miley has been at the forefront of many of the discipline’s most notable milestones.

“Prof. Miley is informally called “The Father” of nuclear pumped lasers by U.S. and Russian scientists working in the area,” according to NPRE Department Head Jim Stubbins. “He has also been termed “The Father” of advanced fuel fusion by fusion scientists internationally. In addition, he is often referred to as “The Father” of the nuclear battery and has written the definitive text on this topic, Direct Conversion of Nuclear Radiation Energy.”

In selecting Miley for the Seaborg Award, the 11,000-member ANS organization has cited his extensive and creative contributions to nuclear science and engineering research and education including fission reactor, nuclear-pumped laser, plasma and fusion science and technology.

Starting in 1963, he and his students pioneered work on U.S. neutron-pumped lasers, developing much of the basic theory and experimentally discovering five new laser types. In 1970 he achieved operation of the first direct electron-beam pumped laser that has since impacted applications ranging from medical to industrial uses.

In the early 1970s, Miley spearheaded and became first director of Illinois’ interdisciplinary fusion program. Through ANS, he published the book, Fusion Energy Conversion, introducing the possibility of advanced fusion fuels such as DHe3 and p-B11 to reduce neutron damage to materials and neutron-induced radioactivity, while allowing increased energy conversion efficiency through direct energy conversion methods.

Over the last 15 years Miley has researched the basic physics of Low Energy Nuclear Reactions (LENR) – a modern form of “cold fusion.” In 2011 he created and four years later sold a start-up company, LENUCO, to study LENR. He also founded and continues to operate a small company, NPL Associates, in which graduate students have worked on plasma-based projects that the Department of Energy and National Aeronautics and Space Administration support.

These and other research achievements of Miley’s have been noted with numerous recognitions:

While conducting his research, Miley supervised the doctoral studies of more than 60 students over the years. The students have gone on to provide leadership in a variety of fields, including professorships at major universities to high positions in industry and government.

Miley has authored or co-authored 10 books, and has edited or co-edited 20 more. His other publications – in book chapters and articles in books, journals, conference proceedings, and reports – number about 500. He also holds many patents. Miley’s effort as the first Editor of the ANS journal, Fusion Technology, played an important role in strengthening the then “new” Fusion Energy Division of ANS. Later, he served as Editor-in-Chief of two prestigious Cambridge University Press journals, Laser and Particle Beams, and Journal of Plasma Physics.

Miley’s career included considerable service as well as research. He chaired the burgeoning Nuclear Engineering Program at Illinois for a dozen years beginning in 1975. Serving on the Nuclear Regulatory Audit Committee (NRAG) for the Clinton Nuclear Power Plant from 1984-1996, Miley headed subcommittee review of operator training, as well as water chemistry and emergency preparedness. He currently serves on the Governor’s Radiation Protection Advisory Committee, and has chaired the Governor’s Technical Advisory Committee on the Illinois Low Level Nuclear Waste Site and Committee on Industrial uses of Radiation Sources in Illinois.

Miley has been very active in ANS over the years, presenting over 90 talks in technical sessions, serving on the boards for four different divisions, serving on the board of directors, and serving on various committees. He is an ANS Fellow, and is also a Fellow of the American Physical Society and IEEE, and is an Associate Fellow of the American Institute of Aeronautics and Astronautics. He has consulted at various companies and three national laboratories: Los Alamos, Lawrence Livermore and Argonne.