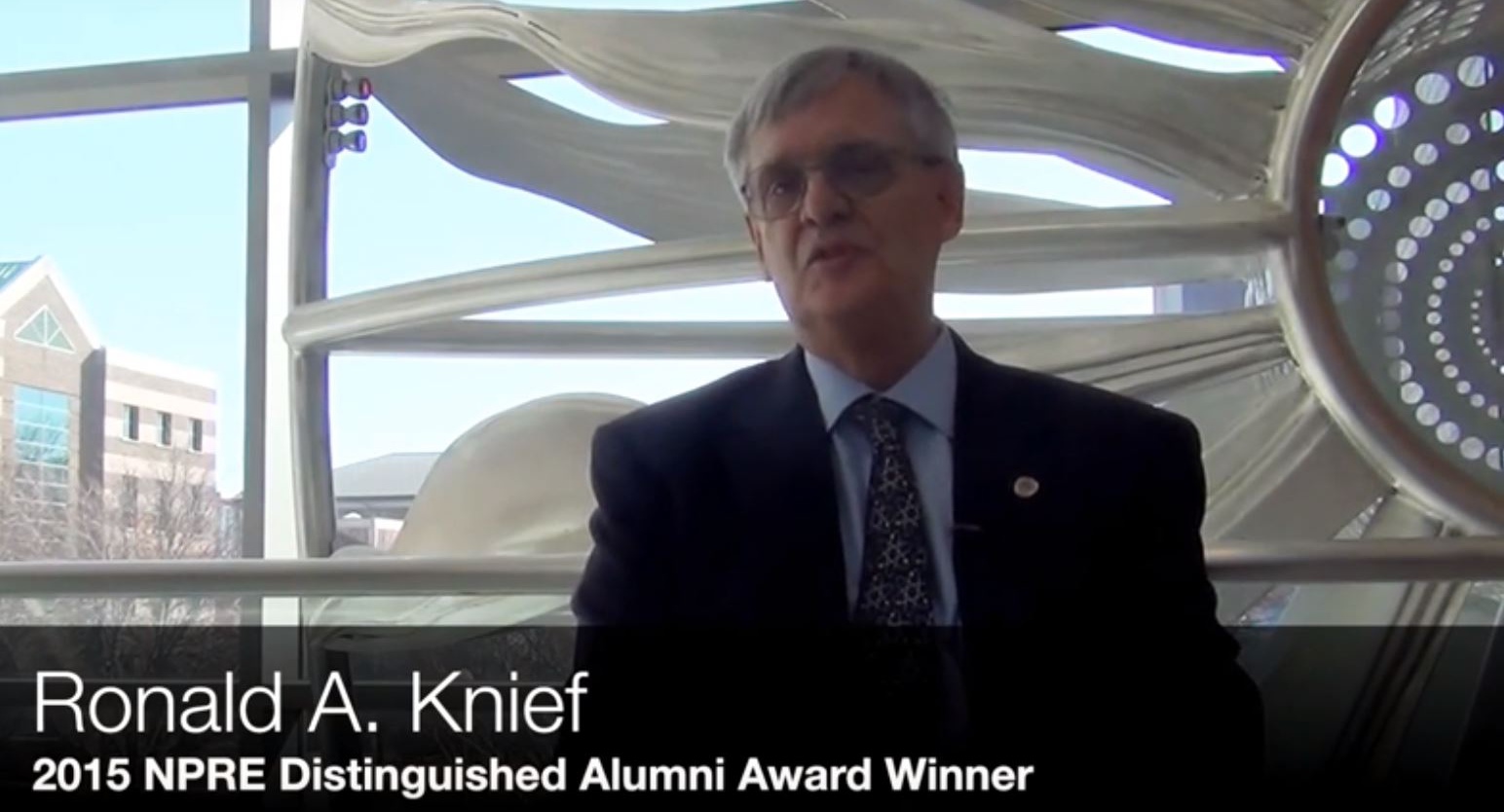 Dr. Ronald A. Knief, a Nuclear Criticality Safety Engineer and Principal Member of the Technical Staff at Sandia National Laboratories, has been selected as the 2015 Distinguished Alumni Award winner for Nuclear, Plasma, and Radiological Engineering at Illinois.

Knief is being recognized for contributions to the store of knowledge in reactor safety, especially criticality safety, and risk management for the nuclear power industry; and for excellence in providing performance-based education and training.

Since 1998, he has had the major responsibility for training and certification of operator personnel at Sandia’s “Technical Area V” research reactors, hot cell, and irradiation facility.

Knief will travel to the Urbana campus on Tuesday, March 31, to receive his award and deliver NPRE's undergraduate and graduate seminars.

Knief spent the 1990’s as a “road-warrior” consultant, specializing in nuclear safety, training, and risk management. Clients included the U.S. Department of Energy (DOE) and most of its nuclear-contractor sites, the U.S. Nuclear Regulatory Commission (NRC), and many NRC nuclear-fuel-facility licensee sites. Various projects have taken him to Canada, the United Kingdom, France, Sweden, Japan, Russia, and the Ukraine.

Knief was Associate/Assistant Professor of Chemical & Nuclear Engineering at the University of New Mexico from 1974 to 1980, developing and teaching most of the graduate courses in nuclear physics, reactor theory, systems, and safety. He also directed the radia¬tion-measurement and reactor-operations laboratories. Knief developed and has continued to serve as advisor and faculty member for the UNM Nuclear Criticality Safety Short Course programs that have educated many of the world’s practitioners.

Knief started his professional career at Combustion Engineering in reactor physics, computational analysis, and fuel management after having earned his doctorate at Illinois. He earned a bachelor’s degree in physics, mathematics, and economics at Albion College in Michigan in 1967.

In addition to his text on criticality safety, Knief has written Nuclear Engineering – Theory and Technology of Commercial Nuclear Power; has edited three books on risk management (with another in progress); and has contributed to 2012’s Encyclopedia of Sustainability Science and Technology as well as earlier encyclopedias and handbooks.

Nuclear Criticality Safety and the 1999 Accident in Tokai-Mura, Japan

ABSTRACT: Having earned his PhD in NPRE in 1972, Knief has been learning, teaching, and consulting on nuclear criticality safety – “of fissionable materials outside of nuclear reactors” – since he organized the first short course on the subject 40 years ago just now at the University of New Mexico.

Knief took an immediate interest in learning lessons from what are now nearly two dozen “process” criticality accidents, responsible for nine fatalities. Consulting assignments have taken him to U.S. facilities following several accident precursor events. Ironically, he was invited to teach criticality safety in Russia – and subsequently, the Ukraine – following both a process accident and a fatal critical-experiment accident there in mid-1997.

This presentation will address the 1999 event in Tokai-Mura, Japan - the most recent process criticality accident – as a means to familiarize the audience with some of the major features of nuclear criticality safety. Knief is author of the textbook for ANS, Nuclear Criticality Safety – Theory and Practice.

ABSTRACT: Knief arrived at the University of New Mexico as a nuclear engineering professor in 1974 just as WASH-1400 and PRA “hit the streets.” NRC-sponsored workshops and interactions with Los Alamos and Sandia National Laboratories staff helped him incorporate the subjects as fundamental elements of the UNM NE curriculum with respect to both reactors and material safeguards.

Next he moved to Three Mile Island in 1980 where work for the TMI-2 recovery and defueling led to involvement with Management Oversight and Risk Tree (MORT) methodology and “infrastructure” associated human-factors elements – e.g., management capabilities, organization, and degree of involvement in proactive safety and reliability practices.

In 1987, TMI’s parent GPU Nuclear Corp. established a Risk Management Group recognizing that PRA had addressed “health & safety” risks that turned out to have been just the tip of the iceberg post-accident. Three other categories – functional capability (e.g., people and equipment), public image and reputation, and financial well-being – were hugely important.

Sometimes it takes great catastrophes – the subjects of this presentation – to bring about needed capabilities. According to his mentor Edwin Zebroski, risk analysis is half of the discipline required for safe and reliable operation. The other half is the decision making and implementation of the remedies that the risk analysis helps to identify and prioritize.