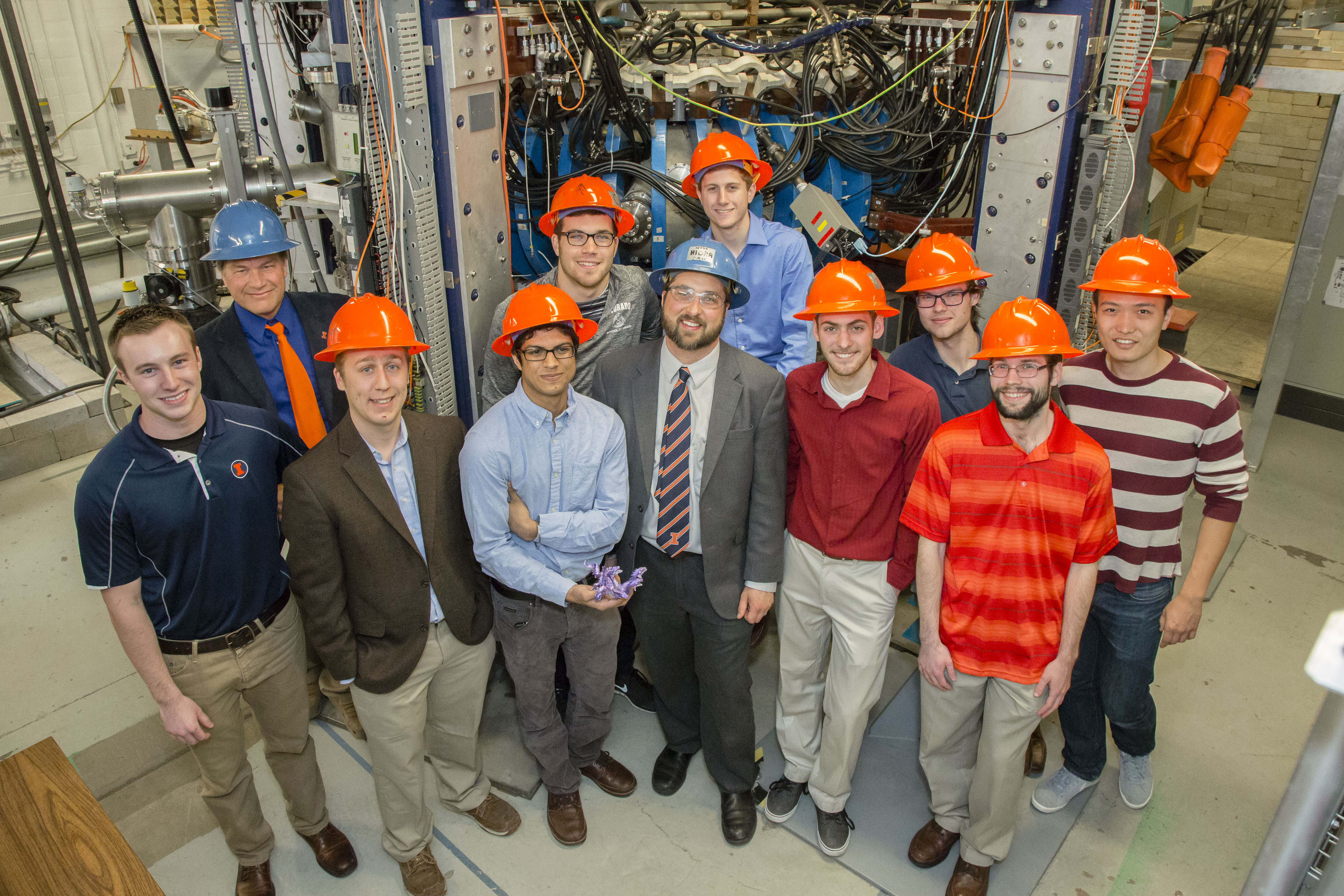 A large crowd of faculty, alumni, students and friends of Nuclear, Plasma, and Radiological Engineering at Illinois filled the Center for Plasma-Material Interactions laboratories April 22, 2016, to witness “first plasma” of the new HIDRA plasma/fusion facility.

The occasion brought much celebration – complete with champagne – as HIDRA, a combination of a tokamak and a stellarator – contained plasma in a steady state for 50 seconds before the demonstration of the “first plasma” was successfully completed. The audience burst into applause as they viewed the progress on a digital screen, watching the first pink light of the plasma appear and then grow.

“This is a great, great day for us,” enthused NPRE Department Head Jim Stubbins, “This is a major experimental system that has been assembled here over the last year and a half. We’re very fortunate to have these new research capabilities.”

Andreas Cangellaris, Dean of Engineering at Illinois, appreciated the “HIDRA” acronym for the device. In Greek mythology, the Hydra of Lerna had many heads and could regenerate them.  Referring to the sprawling machine with its numerous coils and components, the Dean joked, “I can see it has many heads, it has many arms, it has many tentacles.”

HIDRA is formally known as the Hybrid Illinois Device for Research and Applications.

Dean Cangellaris marveled at the ability of the Illinois team, headed by Assistant Research Prof. Daniel Andruczyk, in deconstructing HIDRA at its former home at the Max Planck Institute for Plasma Physics (IPP) in Germany, then reconstructing it after many months at the Urbana campus. Said David Ruzic, CPMI Director and NPRE professor overseeing HIDRA, “Projects like this are only possible because of the phenomenally great students, and postdocs and undergraduates that I have been honored to work with.”

Under Andrucyzk’s supervision, many students joined in rebuilding the mammoth device. They will continue to learn with it through upcoming research projects as well as a new course Andrucyzk hopes to develop.

HIDRA is one of a handful of U.S. nuclear departments offering such a significant facility for plasma/fusion research and education. Ruzic and his colleagues secured the device upon learning in summer 2013 that the IPP in Griefswald, Germany, wanted to replace it with the construction of the world’s biggest stellarator, Wendelstein 7-X, (W7-X) a billion-dollar plasma device for controlled nuclear fusion reaction.