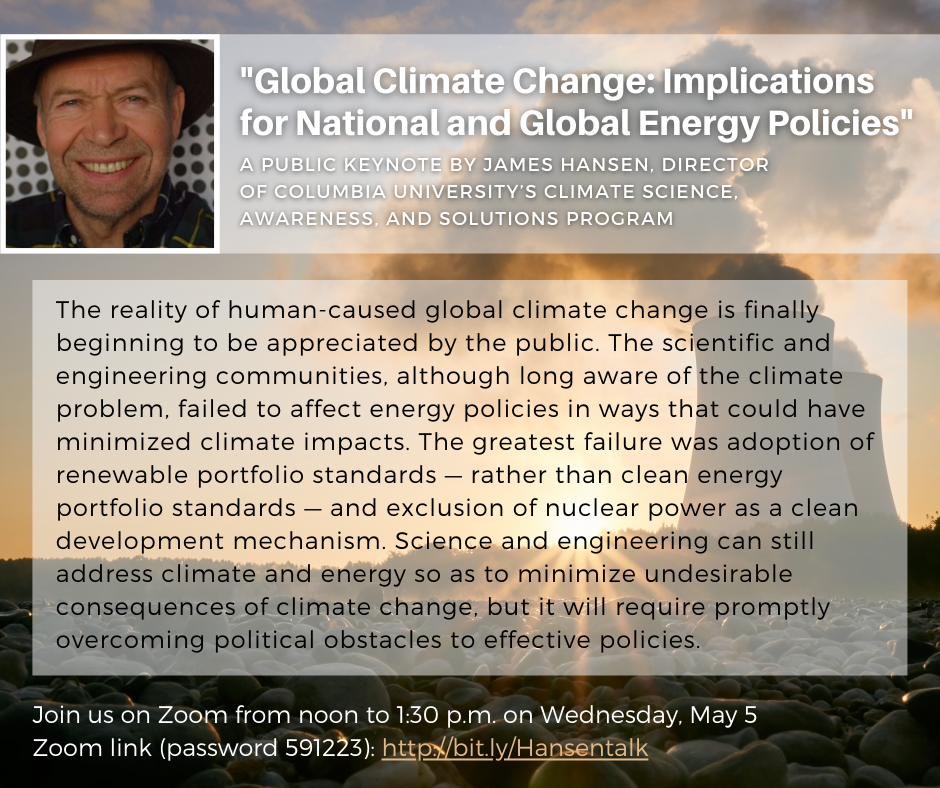 While the public is coming to grips with the reality of human-caused global climate change, U.S. energy policies have yet to catch up.

The scientific and engineering communities, though long aware of the climate problem, have “failed miserably” to affect energy policies in ways that could have minimized the impact of climate change, according to James Hansen, a longtime climate advocate and Director of Columbia University’s Climate Science, Awareness, and Solutions Program.

Hansen will explore that history in a May 5 lecture organized by the Institute for Sustainability, Energy, and Environment (iSEE) at the University of Illinois Urbana-Champaign.

Hansen argues that the greatest failures in energy policy were the adoption of renewable energy portfolio standards, rather than clean energy standards, and the exclusion of nuclear power as a viable development option. Science and engineering can still help minimize the consequences of climate change, but it will require prompt action to overcome political obstacles to effective policies, he says.

“Global Climate Change: Implications for National and Global Energy Policies,” will provide more background and suggestions moving forward. The talk is scheduled for noon-1:30 p.m. Wednesday, May 5; the zoom link is http://bit.ly/Hansontalk (password if prompted is 591223).

Formerly Director of the NASA Goddard Institute for Space Studies, Hansen was trained in physics and astronomy in the space science program. His early research on the clouds of Venus helped identify their composition as sulfuric acid. Since the late 1970s, he has focused his research on Earth’s climate, especially human-made climate change.

Hansen is best known for his testimony on climate change to congressional committees in the 1980s that helped raise broad awareness of the global warming issue. He was elected to the National Academy of Sciences in 1995 and was designated by Time Magazine in 2006 as one of the 100 most influential people on Earth. Hansen is recognized for identifying ineffectual policies as “greenwash” and for outlining actions that the public must take to protect the future of life on our planet.

In addition to directing the climate program for Columbia’s Earth Institute, he is also an Adjunct Professor in the Department of Earth and Environmental Science. For more details, visit his Columbia University webpage.

This lecture will kick off an iSEE Critical Conversation — “The Role of Nuclear Power in a Clean Energy Future” — originally scheduled for May 2020 in Chicago. The Institute and the Department of Nuclear, Plasma, and Radiological Engineering are pleased to host this vital discussion on the future of global energy, economy, and climate.

The goals of these multi-stakeholder Critical Conversations are to understand as many diverse perspectives on a topic as possible to inform future research, and to initiate a collaborative network that will continue to consider multiple perspectives in developing a research agenda geared toward finding actionable solutions. Critical Conversations are supported by the Alvin H. Baum Family Fund, iSEE’s founding benefactor.