Distinguished Alumnus Sridhar to Students: Be Successful and Significant 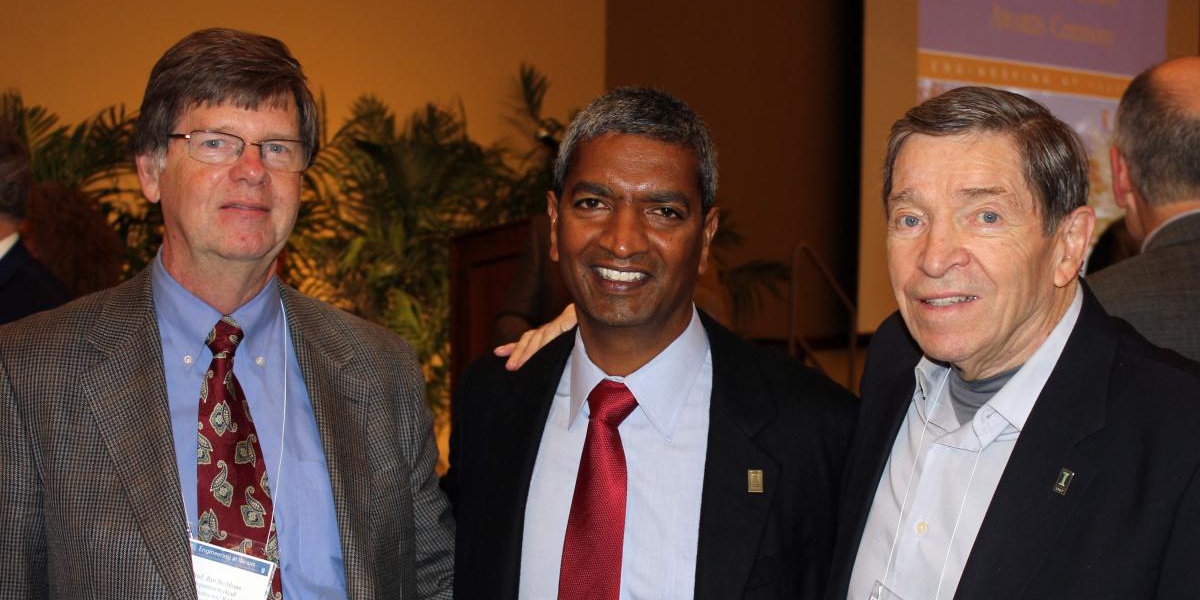 On campus Saturday to be honored by Engineering at Illinois, K.R. Sridhar thanked his NPRE mentors and challenged the College’s top students to be successful and significant.

In a soft-spoken, humble manner, he briefly addressed the audience of students, parents, faculty, administrators, benefactors and others during the College’s Student & Alumni Awards Ceremony. Sridhar gave credit to his advisors, NPRE Emeritus Prof. Barclay Jones and Department Head Jim Stubbins, as well as the late Bei Tse Chao, MechSE professor; and advised student award winners that, while they would certainly be successful, their success should be applied to the betterment of society.

Sridhar has followed his own advice, leaving a mark on the area of clean energy through the establishment and development of his firm, Bloom Energy. The mission of the Sunnyvale, California, company is to produce clean, reliable affordable power from a wide range of renewable or traditional fuels. In order to accomplish this mission, Bloom Energy is changing the way that energy is generated and consumed through the production of its energy servers, also known as Bloom Boxes. These servers result in significantly lower electricity generation costs and greenhouse gas emissions.

Some of the largest firms in the world— including Apple, Wal-Mart, Google, FedEx, eBay, AT&T, Verizon, and The Coca Cola Company—have realized the potential benefits of this technology and have implemented the use of Bloom Boxes.

Prior to founding Bloom Energy, Sridhar was Director of the Space Technologies Laboratory (STL) at the University of Arizona where he was also a professor of Aerospace and Mechanical Engineering. Under his leadership, STL won several nationally competitive contracts to conduct research and development for Mars exploration and flight experiments to Mars. Sridhar has served as an advisor to NASA and has led major consortia of industry, academia, and national labs. His work for the NASA Mars program that involved conversion of Martian atmospheric gases to oxygen for propulsion and life support was recognized by Fortune Magazine, where he was cited as “One of the Top Five Futurists Inventing Tomorrow, Today.”

As one of the early pioneers in green technology, Sridhar also serves as a strategic limited partner at Kleiner Perkins Caufield & Byers and as a special advisor to New Enterprise Associates. He has also served on many technical committees, panels and advisory boards and has several publications and patents.

Sridhar was named one of Time magazine’s “Tech Pioneers Who Will Change Your Life” in 2009, produced one of the publication’s “50 Best Inventions of 2010,” and earned the University of Illinois Department of Mechanical Science Engineering Distinguished Alumnus award in 2011. He is a member of the American Society of Mechanical Engineers (ASME) and the American Institute of Aeronautics and Astronautics (AIAA).