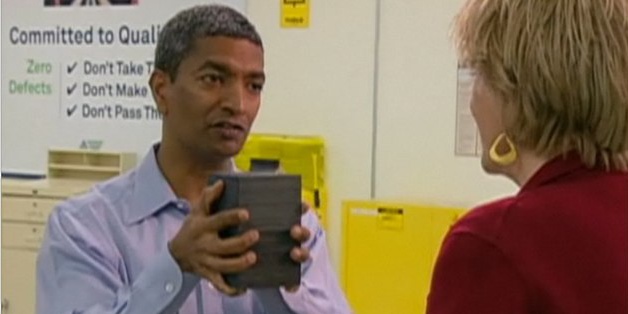 "Bloom Box," a green energy fuel-cell system developed by NPRE alumnus K.R. Sridhar's company, Bloom Energy, has been named one of TIME Magazine's Best 50 Inventions of 2010.
According to the magazine's website story, "Bloom Box – about half the size of a shipping container – generates electricity using solid oxide fuel cells, which provide juice by oxidizing a fuel source."

The invention was unveiled to the public in February and was the subject of a CBS 60 Minutes report. Sridhar predicts the technology will “fundamentally change the world” and have “a disruptive impact on the way energy is produced.”

Bloom Energy has attracted many high-powered believers: the Silicon Valley-based tech firm has raised around $400 million in investment capital. Companies such as Google, Coca Cola, Walmart, FedEx Corp., eBay Inc. and Staples have signed on to test the product.

The groundbreaking technology is based on a “powder to power” concept. Bloom Energy uses common beach sand to produce flat, solid ceramic squares that are the size of a compact disc case. Either side of the square is coated with a green or a black ink made from a secret formula Sridhar developed. Oxygen is fed into one side of the square, and fuel to the other. The two combine within the cell to create a chemical reaction that produces electricity.

One square generates enough power for a light bulb. Stacking the squares one upon the other increases the amount of energy produced. Many of the squares arranged together result in what the company calls a Bloom Energy Server, or, what is nicknamed a “Bloom Box.” Each server provides 100 kilowatts (kW) of power in roughly the footprint of a parking space. Each system generates enough power to meet the needs of approximately 100 average U.S. homes or a small office.

The modular architecture allows customers to start small and “pay as they grow.” Currently, “Bloom Boxes” cost $700,000 to $800,000 each, but the company believes the price can decrease as demand increases.

According to the company, the Bloom Energy Server converts air and nearly any fuel source – ranging from natural gas to a wide range of biogases – into electricity via a clean electrochemical process, rather than dirty combustion. Even running on a fossil fuel, the systems are approximately 67 percent cleaner than a typical coal-fired power plant. When powered by a renewable fuel, they can be 100 percent cleaner.

Founded in 2001, Bloom Energy can trace its roots to the NASA Mars space program. For NASA, Sridhar and his team were charged with building technology to help sustain life on Mars using solar energy and water to produce air to breath and fuel for transportation. They soon realized that their technology could have an even greater impact here on Earth and began work on what would become the Bloom Energy Server.

“Bloom Energy is dedicated to making clean, reliable energy affordable for everyone in the world,” said Sridhar. “We believe that we can have the same kind of impact on energy that the mobile phone had on communications. Just as cell phones circumvented landlines to proliferate telephony, Bloom Energy will enable the adoption of distributed power as a smarter, localized energy source.”

Prior to founding Bloom Energy, Sridhar was Director of the Space Technologies Laboratory (STL) at the University of Arizona, where he was also a professor of Aerospace and Mechanical Engineering. Under his leadership, STL won several nationally competitive contracts to conduct research and development for Mars exploration and flight experiments to Mars.

Sridhar has served as an advisor to NASA and has led major consortia of industry, academia, and national labs. Fortune Magazine recognized his work for the NASA Mars program to convert Martian atmospheric gases to oxygen for propulsion and life support. The magazine cited Sridhar as “one of the top five futurists inventing tomorrow, today.”

As one of the early pioneers in green technology, Sridhar also serves as a strategic limited partner at Kleinberg Perkins Caulfield & Byers and as a special advisor to New Enterprise Associates. He also has served on many technical committees, panels and advisory boards and has several publications and patents.

Sridhar earned his bachelor’s degree in Mechanical Engineering with Honors from the University of Madras, India. As a student at the University of Illinois, he worked with NPRE Profs. Barclay Jones and Jim Stubbins, and with Bei Tse Chao, now emeritus professor of Mechanical Science and Engineering. All three were tremendous mentors, Sridhar said.

“Barclay Jones was such a nurturing person. From him, I learned what it meant to be a good boss and to have a heart. Jim Stubbins was a younger professor who had just joined the faculty from industry; he was full of enthusiasm and energy, and was always available. Both helped very nicely in my transition to B.T. Chao (who supervised Sridhar’s PhD work.)”

“What (Chao) taught me is something that I, too, practice to this day. He was a phenomenal multi-tasker. (As department head, Chao) had one of the biggest mechanical engineering programs in the country, in addition to research and teaching. He always had to do many things on his plate, but he had the knack for focusing on one thing at a time without getting distracted. That was a life lesson; not an engineering lesson.”