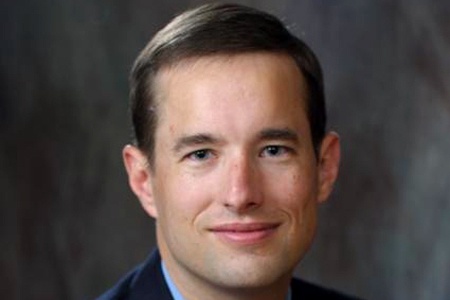 Established in 1957, this award is bestowed upon alumni who have made significant, notable and meritorious contributions, and who have consistently demonstrated exceptional loyalty, commitment, dedication and service to the University of Illinois Alumni Association for the advancement of their Alma Mater.

From his undergraduate days as one of the leaders of the Orange Crush student cheering section and active involvement in many undergraduate student groups, to today, as an active member of NPRE’s alumni constituent group, the Constituent Alumni and Industry Advisory Board, and the College of Education’s Board of Visitors, Neumann has never missed an opportunity to promote the Department, the College of Engineering, and the University.

Perhaps Neumann’s farthest-reaching demonstration of Illinois loyalty began in 2006, when his teacher friend at Anne Fox Elementary School in Hanover Park, Illinois, asked him to get involved in “No Excuses University.” Through this teaching approach, meant to battle high poverty rates and low academic achievement, each class in the school chose a university to study. The premise was that, by getting the young students excited about the universities’ campus life, traditions, buildings, etc., more of the students would be encouraged to attend college themselves.

The teacher, Amanda Smith, asked Neumann, then an NPRE graduate student, to send her students some trinkets from the University of Illinois. Together he and his friend, Richard Stockton, BS 97 Electrical and Computer Engineering, JD 00 Law, gathered notebooks, pens, pencils, and banners to send to the class, then later sent each of the pupils tee shirts. The Chancellor’s Office and the University of Illinois Alumni Association also sent packages of Illinois items.
But Neumann didn’t stop there. He collected $800 from several of his closest friends, and received $700 from the College of Education Development Office to charter a bus to bring the students and their chaperones to the Urbana campus for a day in May 2007. Richard Herman and Linda Katehi, former chancellor and provost, respectively, greeted the group, and local television stations WCIA and WILL provided coverage as the group toured campus.
Said Neumann, “The best thing was their first reaction when they stepped off the bus — that wide-eyed wonderment. We inside the university don’t always realize how great it is.”
The seed that Neumann planted soon flourished. By August 2007, the Alumni Association and the Public Affairs office both began receiving dozens of requests for supplies for Illinois and out-of-state 3rd & 4th grade classrooms that were participating in No Excuses University. Campus development provided a $2,500 grant to purchase and mail supplies to schools as requests were received. Public Affairs provided many of the supplies (pencils, tattoos, bookmarks, viewbooks, DVDs, t-shirts), the Division of Intercollegiate Athletics provided athletic team posters, and the Alumni Association added pompons, frisbees and other Illinois logo items. Since then, the Alumni Association has had contact with about 240 schools in Illinois (mostly the Chicago area) and 35 other states.

This activity on Neumann’s part was not an isolated event. As a graduate student his involvement in academic professional societies showed Illinois in its most positive light. As an adjunct faculty member, Neumann’s promotion of Illinois took on an international character when he organized an open house in April 2009 to draw businesses to join the Center for Plasma-Material Interactions, which he helped direct with NPRE Prof. David N. Ruzic. Over 40 researchers from five different countries came to the Urbana campus and the Center received over $150,000 of funding in the process, as well as a five-year grant from the National Science Foundation.
Neumann also has been very supportive in his personal financial contributions. His giving started while he was a student and continues today as he works with the NPRE Department to develop and encourage giving among other alumni.

In addition, Neumann has participated in NPRE Interchanges, events designed to bring alumni back to campus to network and interact with students and faculty. Alumni attend as representatives of their employers. In his capacity as a senior engineer, Neumann has represented San Jose, California-based Soladigm, a developer of next-generation green building solutions designed to improve energy efficiency.

When Susan (Mumm, NPRE Alumni Coordinator) told me that I was getting this award and that I would need to give a speech, I thought what could I say that anyone would want to hear? I’m not that good of a speaker, who wants to hear me? Then, I thought about something while I was walking around today on campus.
I’d like to quote one of my favorite quotes: ‘To thy happy children of the future, those of the past send greetings.’
We’ve all seen it on the base of our beloved Alma Mater, whether she was standing originally behind Follinger, or where she and her compatriots ‘Learning’ and ‘Labor’ now stand outside of Altgeld.

I think this quote is apropos for this week as we celebrate and honor Dr. (George H.) Miley’s legacy to the campus and students of Illinois. I was fortunate to first learn of Tolodial fields, banana currents, and the Lawson criteria in Dr. Miley’s fusion class, and much more over the years. Thank you, Dr. Miley.
I said this quote was apropos for this week because so many of us from the past are here to send greetings, not only to Dr. Miley, but also to the department and campus.

However, those of the past continually send greetings every day. They do it when they send a donation, when they come back to lecture, visit students, service on boards, mentor students, or even speak of Illinois to the those in their daily lives away from campus.

What we have on campus, what is here is the summation of those of the past. I was fortunate to have many great experiences as a student here because of those from the past whom I never met or know, laid the groundwork. I helped manage Orange Krush because there were fellow Illinois basketball zealots decades ahead of me who paved the way. The same with Homecoming because of students in 1910. This can be said of so many things that all of us have taken part of, and maybe take for granted.
I look at my experiences in the department…From Dr. (Barclay G.) Jones taking the time to meet with my father and me before I ever enrolled, Dr. (Roy A.) Axford spending extra time with me as my undergraduate advisor and Mrs. (Ann) Axford answering the phone for those late night calls to Dr. Axford for help with his homework assignments, Dr. (David) Ruzic and his wife, Marilyn, for opening their home to their students and helping shape me as the researcher and engineer that I am today, and Dr. Stubbins helping me to develop as a person. None of these people had to do this. Why did they? Someone did it for them along the way. Someone helped provide the resources to the department for today’s students. I look at the tireless work that (NPRE alumni) Mike Giacobbe, and Debbie and Terrill Laughton have done. Why? Because others had done this before and they, like many of us, felt the sense of duty to continue and do their part.

I’d like to close with a lesser-known quote that is also a favorite of mine. It, too, is just outside of Altgeld and I walked by it today, but on the backside in a hidden peaceful grove of trees. It is on the grave of John Milton Gregory, the first president of the University – it is very peaceful.
‘If you seek his monument, look around you.’

When you look around campus, you don’t merely see buildings – you see the past, the people of our campus’ past. It is their monument. Now, more than ever, NPRE and campus need your support – financial, time, effort, or even speaking kindly of Illinois to others, and help me, help us, build our monument, this campus, for the future.
It is unclear to me that I deserve this award, but I will do my best to earn it.
Thank you.”