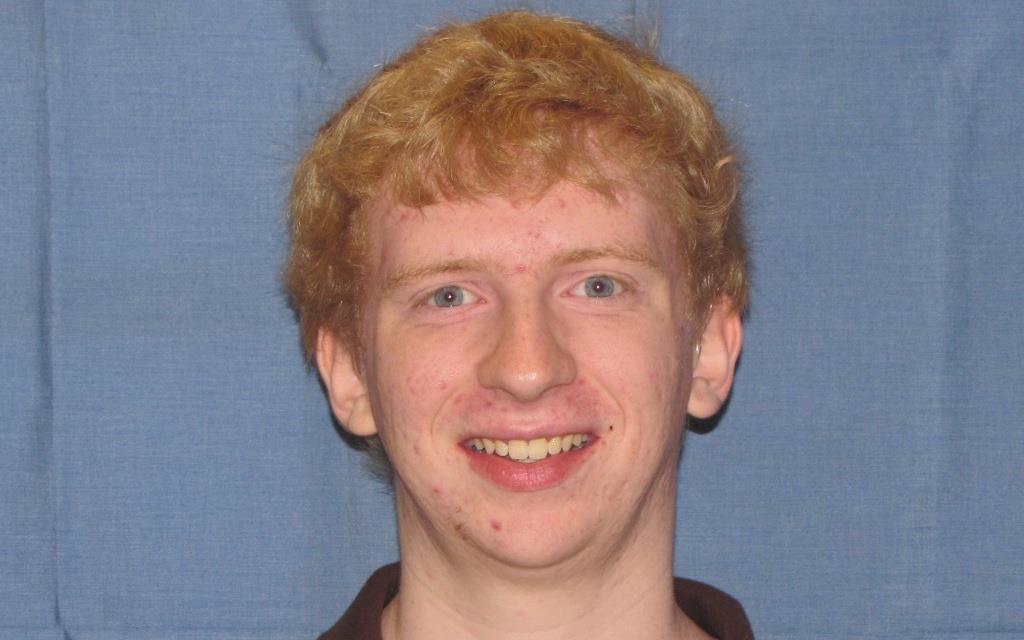 With near perfect grades as an undergrad, a recent National Science Foundation fellowship award to pay for graduate school, and a key role in innovative research involving nano-patterning of surfaces, Mike Lively is doing well by anyone’s standards.

He hasn’t been hindered by the fact that, even with his hearing aids, his auditory perception is just 50 percent. Rather, he believes his hard of hearing, a condition he has had since childhood, has its advantages.

“I think about things and see things differently,” Lively maintains. “I perceive things in ways that other people miss.”

His advisor, J.P. Allain, associate professor of Nuclear, Plasma, and Radiological Engineering (NPRE) at Illinois, agrees. Illustrating, Allain recalls how a visiting colleague commented on Lively’s intuitive nature while doing research. “He said Mike can see through certain problems that others can’t,” Allain said. “(Mike’s) other senses are heightened; and he’s okay with it.”

Lively reads lips, and adjusts to classroom situations by using an FM microphone system. “The professor wears an FM mike unit that transmits directly to my hearing aids, so no one else is affected. This has had the side effect that my professors always know my name from the very start of the class – you can imagine this can be useful sometimes.”

Having earned his bachelor’s from Purdue University in 2014, Lively chose to follow Allain to Illinois for graduate school. Allain made the switch in 2013.

Lively does computer modeling for directing ion beams to make patterns on materials such as silicon, used by the semi conductor industry primarily for computer chips. Mentored at Purdue by Allain’s former graduate student, Eric Yang, Lively helped develop code that produces a realistic description of radiated ions’ interaction with the silicon, and was an author of subsequent papers on the research. Work done previous to their study made assumptions about the interactions without considering the nature on an atomic scale.

“We can no longer neglect (the mechanics) because those become critical in how one can nanopattern from the bottom up,” Allain said. “Atom by atom, we create new materials; you can’t do that without understanding the mechanics.”

A second paper Allain, Yang and Lively have produced from the research has been accepted recently for publication in the journal, Physical Review B of the American Physical Society. Lively notes with a smile that while it’s his second publication, it marks Allain’s 100th.

Lively continues to develop improvements to the model. The group’s original work expected atoms to be knocked off the surface when the ions hit. Instead, Lively realized the surface was growing larger. By picking up on that phenomena, “we’re now looking at how we can improve the physical framework of the model in order to correct it,” Lively said.

Allain said the researchers are working to understand how the material’s surface relaxes after the ions’ initial bombardment. “We know that atoms move about on the surface then self-organize to form patterns,” he said. “Mike has been thinking about the appropriate model to do this.”

“Minor details are actually significant in the model for our particular application,” Lively noted.

His attention to the details provides Allain a great advantage in setting up corresponding experiments. “We don’t have to stretch far in interpreting the model’s results, whereas in other models you do.”

Understanding this kind of molecular dynamics requires time, patience and extensive consideration of all elements involved. “The ions create craters (on the material’s surface). It takes about a week to get one set of craters,” Allain said. “It’s a whole other computational scheme to conduct the relaxation (of the surface).”

Lively has drafted a proposal to the National Center for Supercomputing Applications (NCSA) to gain access to petascale computing for the work. He also hopes to use Blue Waters, the fastest supercomputer on the Urbana campus, and XSEDE (Extreme Science and Engineering Discovery Environment), a network of computer resources across the country.

While much of his work has involved programming, Lively chose as an undergrad to apply his conceptual and mathematical thinking skills to nuclear engineering. “It sounded like more fun than electrical engineering,” he said. “My intellectual makeup is very academic; I knew as a freshmen I wanted to do research and grad work.”

Lively recalls Allain was quick to set the course. “In the first meeting I had with him, JP asked me, ‘Do you know what a tokomak (fusion reactor) is?’ I said, ‘No.’ He handed me two textbooks and that was the meeting. The next meeting, he gave me 150 pages of research work to read.”

Allain then assigned Yang to mentor Lively. Now as a graduate student, Lively is mentoring undergraduate Ryan Gonsalves, a mathematics major in the group. Lively values the teaching opportunity, and believes he could add something special to being a faculty member sometime in the future.

“As a professor, I would like to inspire more deaf and hard of hearing individuals into science and engineering,” he said. “When I look at the deaf community, there’s positive things that can come out of seeing the world and interacting with the world in a different way.”

In addition to his own talents that Lively adds to the research group, he helps others in Allain’s team hone their skills. Allain said he realized this during conference calls among group members.

“When we sit down and put a speaker on, we now become more conscious of what we say because Mike needs to hear,” Allain said. “We become more descriptive about what we say and the conversation we engage in; it makes our discussions more in-depth.”