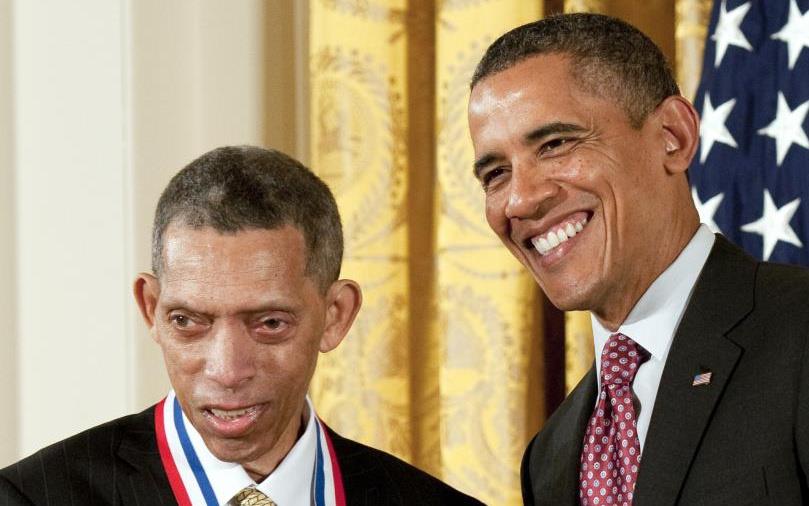 Nuclear, Plasma, and Radiological Engineering alumnus George R. Carruthers will be honored with the University of Illinois’ highest alumni award during Commencement, May 17, on the Urbana-Champaign campus.

The University of Illinois Alumni Achievement Award is presented to those alumni who have attained outstanding success and national or international distinction in their chosen profession or life’s work, and whose accomplishments reflect admirably on, or bring honor to, their Alma Mater. Carruthers, BS 61 Aerospace Engineering (AE), MS 62 Nuclear, Plasma, and Radiological Engineering, PhD 64 AE, performed groundbreaking work in far ultraviolet astronomy as a Naval Research Laboratory scientist. His rocket-borne telescope of ultraviolet star radiation brought long-sought proof that hydrogen atoms are converted to molecules in dust clouds in interstellar space and catalyze the birth of stars.

In February 2013, President Barack Obama honored Carruthers by presenting him the National Medal of Technology and Innovation at the White House. Carruthers, among the earliest African Americans to earn an AE degree, was one of seven scientists nationwide to be recognized with the medal at that ceremony.

Influenced by the Space Race of the late 1950s and 1960s, Carruthers, a scientist at the Office of Naval Research Laboratory, performed groundbreaking work in far ultraviolet astronomy. His efforts led to a patent for pioneering instrumentation, an image convertor for detecting electromagnetic radiation, especially in short wave lengths. In 1970 he gained international attention when the photographs from his rocket-borne telescope of ultraviolet star radiation brought long-sought proof that hydrogen atoms are converted to molecules in dust clouds in interstellar space and catalyze the birth of stars. In 1972 his far ultraviolet camera spectrograph was sent to the moon with the Apollo 16 mission, allowing ONRL to take readings of and understand objects and elements in space that are unrecognizable to the naked eye. The camera, which remains on the moon, provided views of stars and solar systems millions of miles away.

A second version of the camera was sent on the 1974 SkyLab space flight to study comets, and was used to observe Halley's, West's and Kohoutek's comets. Carruthers’ instruments were involved in capturing an image of a Leonid shower meteor entering the earth’s atmosphere, the first time a meteor has been imaged in the far ultraviolet from a space-borne camera.

US Black Engineer magazine in 1993 named Carruthers among the first 100 recipients of the Black Engineer of the Year award. As the head of the Space Science Division’s Ultraviolet Measurements Group, Carruthers in the year 2000 received the first Outstanding Scientist Award from the National Institute of Science, which provides for the exchange of scientific information and the presentation of scholarly research papers by science students and faculty members primarily from Historically Black Colleges and Universities. BlackEngineer.com in 2010 listed Carruthers among the 50 Most Important Blacks in Research Science.

Carruthers received the AE Outstanding Recent Alumnus Award in 1974, and the College of Engineering at Illinois Alumni Award for Distinguished Service in 1975. Other honors Carruthers has received include:

As a youngster growing up in Milford, Ohio, Carruthers enjoyed reading science fiction and constructed model rockets with the help of his father, a civil engineer. At the age of 10, Carruthers built his first telescope with a cardboard tube and a lens he purchased through mail-order. He was 12 when the family moved to Chicago following his father’s death. There, Carruthers frequented libraries and museums, including the Adler Planetarium, and joined the Chicago Rocket Society.

Carruthers has been active in many groups aimed at encouraging African Americans to be technologically literate and become involved in science and technology careers. Among them have been the National Technical Association, the National Society of Black Physicists, Project SMART and NASA’s District of Columbia Space Grant Consortium.