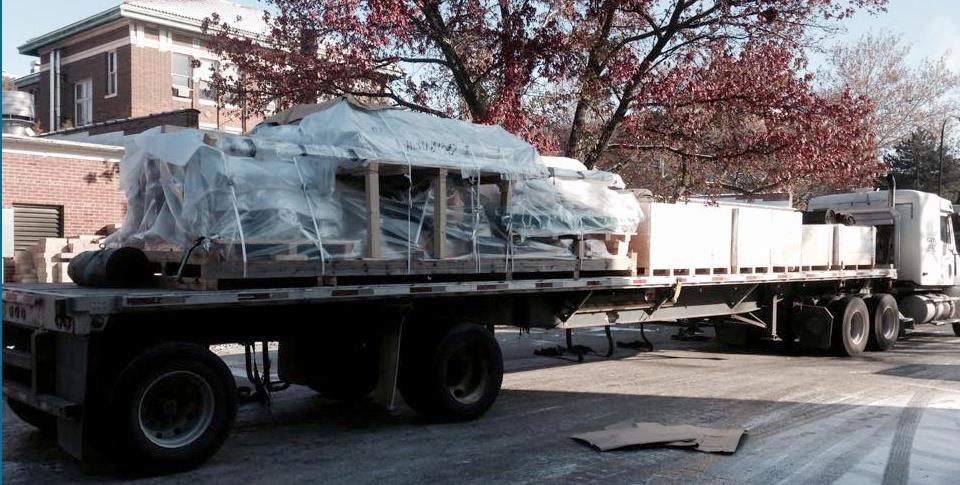 HIDRA has arrived at NPRE.

The multi-million dollar plasma/fusion advanced physics testing facility that the Max Planck Institute for Plasma Physics (IPP) has gifted to the University of Illinois and, in particular, to NPRE, began arriving on campus in shipments today. Trucks bringing boxes of parts of the device – disassembled in Greifswald, Germany over the summer – will continue arriving through Thursday. Rebuilding will begin immediately upon arrival and operations are expected to begin by the middle of next year.

With HIDRA, the University of Illinois at Urbana-Champaign joins a short list of universities worldwide that have an operating fusion device on its campus. The relationship NPRE’s plasma/fusion group has developed with IPP has been a major reason Illinois was chosen as the new home for the former WEGA facility, now renamed HIDRA (Hybrid Illinois Device for Research and Applications).

“Fusion is a limitless clean source of energy,” explained David Ruzic, a professor and director of the Center for Plasma-Material Interactions (CPMI) at Illinois. “While commercial fusion power is still a long way off, realizing it could dramatically change society.  The things we will learn with HIDRA will help us make significant progress in fusion research.

“Fusion is the joining together of light elements—just like what the sun does, and when that happens, energy is released,” Ruzic said. “The sun is made of plasma—hot ionized gas. HIDRA is a device that confines plasma in the shape of a donut—allowing it to be heated and studied. HIDRA will be the first fusion device of its kind solely devoted to studying how the hot confined plasma interacts with the material on the boundary—the walls themselves—and what is learned can directly translate into future fusion energy production.”

The HIDRA will also aid in developing and utilizing new materials for a variety of engineering purposes, along with providing the data to verify computational models.
“Computer resources such as Blue Waters have attracted top computational scientists,” Ruzic said. “The new models they create need to be benchmarked with experimental data. Since our device can run steady state, the amount of data we can generate is enormous. Such a data set could be of great use in verifying and aiding in the creation of new computational paradigms which could eventually transform society.”

Ruzic estimates that it would cost $10-$20 million to build it from scratch. The University’s acquisition of HIDRA began in Summer 2013, when a group of NPRE researchers learned that the Max Planck Institute in Griefswald, Germany, had completed its WEGA experiments and was interested in giving away the equipment.  The possibility of transferring the WEGA equipment to the Nuclear Radiation Laboratory, CPMI’s home at Illinois, then became serious. Besides the sheer size of the machine, the disassembly, shipping and rebuilding involves many technical challenges. For example, a European toroidal reactor has never been moved to the United States before; all of its major power components are rated for EU standards and must be adapted to operate in the U.S. electrical network.

The technical details were resolved by January 2014, and Ruzic traveled to Germany, with NPRE colleagues Jean Paul Allain and Davide Curreli, to finalize the deal. Ruzic’s former postdoctoral research associate, Daniel Andruczyk, who had worked on the WEGA machine prior to coming to Illinois, was hired as a research assistant professor to run the machine.

In September, researchers and students from CPMI spent a month in Greifswald disassembling, packing, and readying the HIDRA for shipping.
In addition to enabling research, HIDRA is an exceptional teaching tool. Students will learn as they help rebuild the device this summer and fall. In addition, Andruczyk will begin teaching 200-level, 400-level and 500-level courses in Fusion Device Operations as early as Spring 2015.

“I will be teaching a class in the design and operations of fusion devices,” Andruczyk said. “It’s all well and good to know the plasma equations and know the theory, but learning what goes into designing, building and testing such a device is extremely important, and as far as I know there is nowhere else that really offers a course like this.”
The College of Engineering and the University’s Office of the Vice Chancellor for Research will share NPRE’s shipping costs and infrastructure support for HIDRA. The equipment, itself, comes at no cost to NPRE or the university.

“This is what Illinois does,” said Andreas Cangellaris, dean of the College of Engineering. “Our amazing faculty members like Professors Ruzic, Allain, and Curreli take on projects that strain the limits of feasibility. They look them in the eye. They get the job done. And they open entirely new avenues of research for our faculty and new educational experiences for our students. They do the impossible every day.”