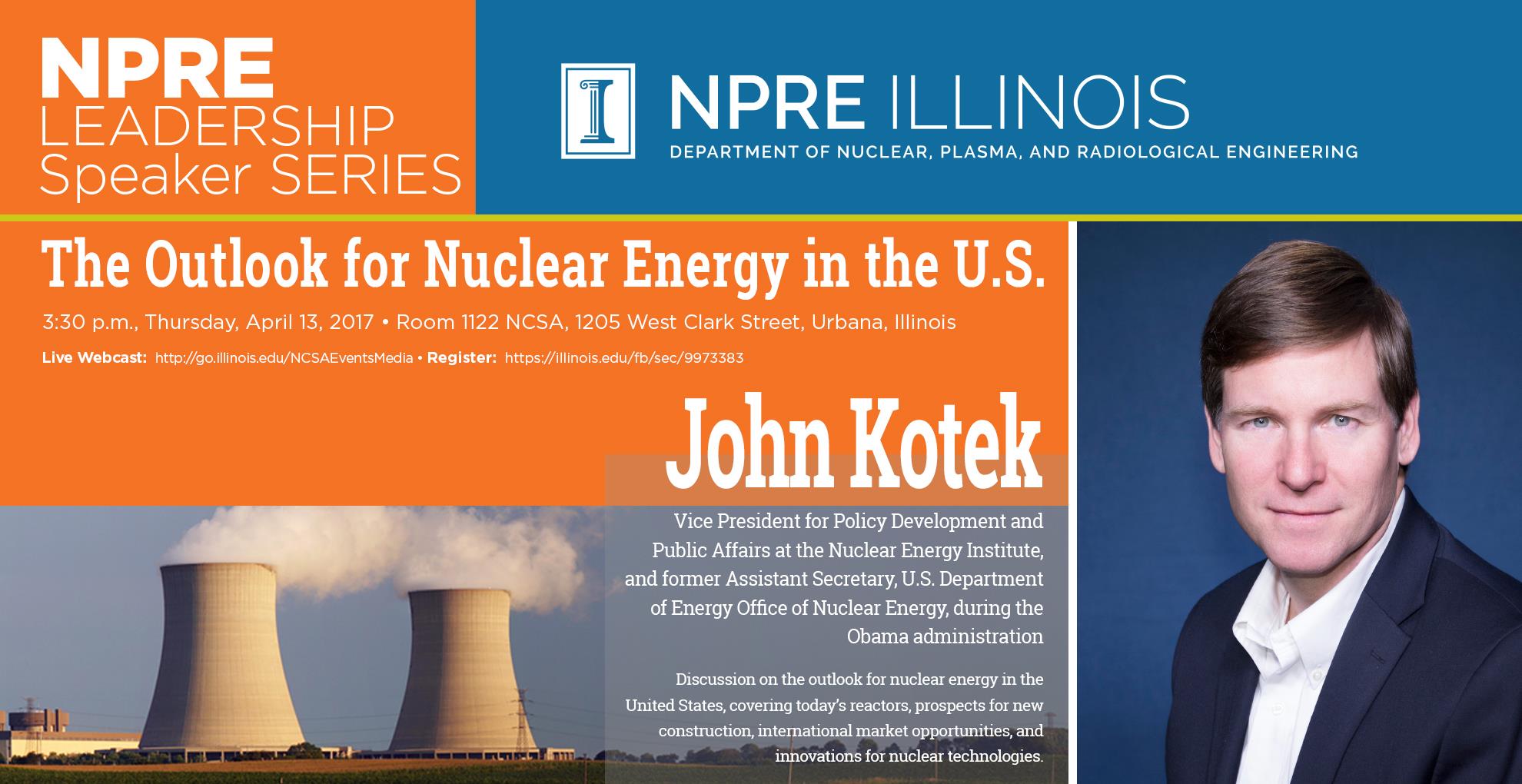 Kotek, current Vice President for Policy Development and Public Affairs at the Nuclear Energy Institute, and former Assistant Secretary of the U.S. Department of Energy Office, Office of Nuclear Energy during the Obama Administration, will discuss his views on "The Outlook for Nuclear Energy in the U.S." Chosen as the winner of the 2017 Distinguished Alumni Award for the Department of Nuclear, Plasma, and Radiological Engineering at Illinois, Kotek will cover today’s reactors, prospects for new construction, international market opportunities, and the path forward for innovative nuclear technologies.

The talk will take place at 3:30 p.m., Room 1122 National Center for Supercomputing Applications, 1205 W. Clark Street, Urbana, Illinois. A live webcast will be featured. Attendees are asked to register for the talk.

In his current position, Kotek is responsible for providing policy and public affairs leadership on financial, economic, tax, electricity market and environmental issues related to the nuclear energy industry.

President Barack Obama nominated Kotek in October 2015 to serve as Assistant Secretary for Nuclear Energy, following his appointment in January 2015 as Principal Deputy Assistant Secretary. Kotek was responsible for the DOE’s research efforts on current and future nuclear energy systems, maintaining the government’s nuclear energy research infrastructure, establishing a path forward for the nation’s spent nuclear fuel and high-level nuclear waste management program, and a host of other national priorities.

Prior to his appointment, Kotek was Managing Partner of the Boise office of Gallatin Public Affairs, where he advised energy, natural resources and other clients facing complex communication and government relations challenges.

From 2010-2012, Kotek served as Staff Director to the Blue Ribbon Commission on America’s Nuclear Future. The Commission recommended a new strategy for managing nuclear waste in the United States. Kotek led the development of the Commission’s final report to the Secretary of Energy, engaged in regular communications with Congressional and White House staff, and served as media spokesperson.

From 2003-2006, he was Deputy Manager of the DOE’s Idaho Operations Office. Kotek developed and managed the Idaho National Laboratory contract and interface with the INL cleanup effort.

Before joining DOE in July 2003, he worked for Argonne National Laboratory where he directed Argonne’s participation in the Generation IV technology roadmapping project, an international effort focused on evaluating and developing a next-generation of nuclear energy systems.

In 2002, Kotek was the American Nuclear Society’s Glenn T. Seaborg Congressional Fellow, serving in the Office of Senator Jeff Bingaman (D-NM), Chairman of the Senate Energy and Natural Resources Committee.

John earned his bachelor’s in NPRE in 1989. He also holds a Master of Business Administration from the University of Maryland. He lives in Boise, Idaho, with his wife, Denise, and their three children.

He will be presented NPRE’s Distinguished Alumni Award during the NPRE/American Nuclear Society Student Chapter Honors Banquet on April 13. The award is presented to NPRE alumni who make notable advances in the field of nuclear science, and/or lasting contributions to society in general. Through their careers and voluntary service, these individuals bring honor upon themselves as well as to their fellow graduates, the Department, the College of Engineering, and the University of Illinois.

The NPRE Constituent Alumni and Industry Advisory Board sponsors the Leadership Speaker Series, which provides a forum for global leaders to present views and policies, particularly those impacting NPRE’s disciplines as well as all other issues relevant to energy sustainability.